After Clearing Committee Vote, Here’s What’s Next for Gorsuch 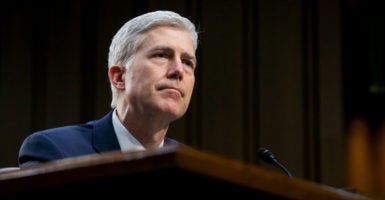 The nuclear option and two-speech rule have never been invoked or used to confirm a nominee to the high court. (Photo: Kris Tripplaar/Sipa USA/Newscom)

Chairman @ChuckGrassley: The nomination of Judge Neil Gorsuch to be Associate Justice of #SCOTUS is reported favorably to the Senate floor.

A vote for Gorsuch will likely occur by Friday.

Sen. Patrick Leahy, D–Vt., said he would oppose Gorsuch because the Supreme Court nominee failed to forecast how he would vote on issues that might come to the high court.

“For those of us who hoped that Judge Gorsuch would use his confirmation hearings to give insight into the type of justice he would be, we were certainly disappointed,” Leahy said in a statement. “Based on his record, I had concerns about his views and whether he would bring a partisan agenda to the court. Judge Gorsuch did nothing to allay those fears. He, in fact, solidified them.”

Sen. Leahy’s Statement On His Decision To Vote No On The Gorsuch Nomination, And To Also Oppose Advancing The Nom. https://t.co/a27KEIQgwk

Democrats are poised to filibuster Gorsuch and have secured 41 “no” votes, which will force Republicans to use the nuclear option to confirm Gorsuch, according to Roll Call.

If Democrats filibuster, Gorsuch could still be confirmed with 51 votes if Republicans choose to implement the nuclear option or the two-speech rule, a Senate rule that mandates the Senate stay in the same legislative day until filibustering senators give up on their efforts.

Rachel Bovard, director of policy services at The Heritage Foundation and a former Senate aide, told The Daily Signal in an email that the nuclear option will likely be used to confirm Gorsuch.

“The Senate has two ways to overcome a filibuster, by utilizing the two-speech rule or invoking the nuclear option,” Bovard said. “Media reports suggest [Senate Majority Leader Mitch] McConnell will use the latter, following the precedent set by former Senate Majority Leader Harry Reid in 2013.”

In 2013, Democrats used the “nuclear option” to abolish the filibuster on nominees, except for nominees to the Supreme Court.

Republican lawmakers would not be breaking Senate rules, just violating them, if they decide to use the nuclear option to confirm Gorsuch, according to Bovard.

“The nuclear option violates the Senate’s standing rules, which require 60 votes to overcome a filibuster, by setting a precedent for confirmation of Supreme Court nominees at a majority threshold,” Bovard said. “If the Senate actually wanted to change its standing rules, 67 votes would be required.”

If Republicans use either the nuclear option or the two-speech rule to confirm Gorsuch, the 60-vote threshold to end debate would be waived and just one vote with 51 senators voting in the affirmative would be required.

Invoking the nuclear option or two-speech rule on Gorsuch would be a historic change in precedent for Supreme Court nominees, as neither have ever been invoked or used to confirm a nominee for the high court.

“You’d have to look long and hard to find a better nominee for this court than Neil Gorsuch.” @GorsuchFacts #ConfirmGorsuch #utpol #tcot pic.twitter.com/Jq16ZRS6hW

If Democrats filibuster Gorsuch, they will be conducting the first partisan filibuster of a Supreme Court nominee in American history, according to Carrie Severino, chief counsel at the Judicial Crisis Network.

“Senate Democrats are launching the first partisan filibuster of a Supreme Court nominee in American history, denying an up-or-down vote for an exceptionally well-qualified, mainstream judge who has bipartisan support of a majority of Senators,” Severino said in a statement provided to The Daily Signal, adding:

In the face of this unprecedented obstruction, Leader McConnell and his colleagues will have no choice but to invoke the constitutional option to preserve the Senate tradition of up-or-down votes.

In late October, however, Sen. Tim Kaine, D-Va., predicted that his party would “change the Senate rules” to confirm a ninth Supreme Court justice if Democrats won control of the upper chamber in November.

John Malcolm, the director of the Edwin Meese III Center for Legal and Judicial Studies and a senior legal fellow at The Heritage Foundation, told The Daily Signal in an email that Gorsuch is a qualified candidate for the high court and must receive an up-or-down vote. Malcolm said:

Throughout his career on the 10th Circuit Court of Appeals, Neil Gorsuch has demonstrated time and time again that he is a principled constitutionalist and a textualist, who will apply the law equally to all citizens and will not attempt to rewrite the law to suit his own personal or political beliefs.

“Judge Gorsuch is an eminently qualified jurist,” Malcolm said. “He deserves an up-or-down vote, and ought to be confirmed to the Supreme Court.”