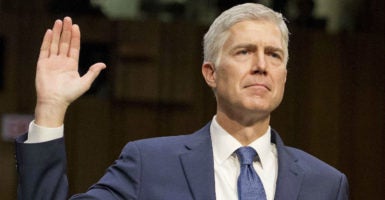 During his second day of questioning before the Senate Judiciary Committee, Judge Neil Gorsuch promised that he would be faithful to the Constitution. (Photo: Ron Sachs/SIPA /Newscom)

President Donald Trump’s nominee for the Supreme Court, Neil Gorsuch, promised that he would remain faithful to the Constitution in his second day of questioning before the Senate Judiciary Committee.

Sen. Ted Cruz, R-Texas, asked Gorsuch if he would honor precedent and remain faithful to the Constitution if confirmed as an associate justice of the Supreme Court.

“I will ask you this,” Cruz said. “As a judge today, and as I believe, a justice in short order, will you pledge to be faithful to the law and the Constitution and neither favor nor disfavor any litigant based on who they are?”

Gorsuch promised that he could deliver on this request.

“I guarantee you no more and I promise you no less,” Gorsuch said.

“That is precisely what we should expect,” Cruz said.

Cruz said he was disappointed by the efforts of some of his Democrat colleagues to over-politicize the confirmation process.

“My colleagues, the Democrats, have a right to engage in whatever attacks they choose,” Cruz said. “But it’s a little rich for them to be maligning a sitting federal judge and at the same time giving speeches about how unacceptable it is for anyone to criticize a federal judge.”

“If you breathe air, drink water, eat food, take medicine, or in any other way interact with the courts, this is a very bad decision,” Pelosi said of Gorsuch’s nomination.

Pelosi said Gorsuch is “well outside the mainstream of American legal thought, not committed to Supreme Court precedents.”

The accusations against Gorsuch, according to Cruz, are inappropriate.

“You can’t have both at the same time. Now I am not going to ask you to respond to any of these attacks. I actually think these attacks speak for themselves,” Cruz said.