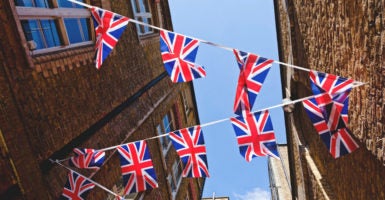 Britain’s fourth annual Freedom Festival, organized by the Freedom Association and held in the traditional seaside resort of Bournemouth, concluded on Sunday.

Like the U.S. Conservative Political Action Conference, or CPAC, the festival brings together conservatives and libertarians to discuss, debate—and this year, to celebrate.

Founded in 1975 by Norris McWhirter, the creator of the Guinness Book of World Records, the Freedom Association has a distinguished record of supporting free enterprise and free expression in Britain.

But without doubt, its major cause in recent years, expressed in its Better Off Out campaign (directed by Rory Broomfield), was to extricate Britain from the European Union.

That cause won a brilliant victory last June 23, when Britain voted for Brexit. And it won a second victory—nearly as important as the first—when Parliament voted on March 13 to give the Britain’s Conservative government the power to trigger the EU’s Article 50, the exit door from the EU.

The government will pull that trigger on Wednesday, March 29.

And that is that. By the end of March 2019, at the latest, Britain will almost certainly be out of the EU.

The terms of its freedom have yet to be negotiated, and there are many more legislative mountains to climb over the next year. But the fundamental fact is that Britain is going to regain its independence and sovereignty.

That is an immense triumph for Britain, for the cause of free democracies, for the United States—and for the Freedom Association.

As a result, the mood in Bournemouth was buoyant, with intense interest in the new possibilities for Britain to return to its traditional policy of free trade, which membership in the EU prohibits.

Even more important, though, is the fact that Britain now has a unique opportunity to limit government. For the past 44 years, Britain’s administrative state has grown up around the EU.

Now, at the dawn of a new industrial revolution of robots, computers, and automation, and the steady economic decline of the EU, Britain has the opportunity to rethink its administrative state.

Indeed, breaking away from the EU will be so complicated that Britain will almost have to rethink. That is the great opportunity of Brexit.

Of course, the festival was also deeply interested in the rise, victory, and plans of President Donald Trump.

Britain’s exit from the EU is an opportunity for it to do many things—in particular to control its borders and deepen its relationship with the Commonwealth—but it definitely opens new doors for collaboration with the U.S. in trade, finance, defense, and much more.

All the festival attendees welcomed, in particular, the president’s support for a U.S.-U.K. free trade area, about which we can expect to hear much more in the coming months. Just last month, Nile Gardiner, director of the Margaret Thatcher Center for Freedom at The Heritage Foundation, gave important and up-to-date testimony to Congress on this subject.

In a sign of the Freedom Association’s reach, it was addressed by both Parliament member Priti Patel, Britain’s secretary of state for international development and a rising star in the Conservative Party, and professor Ted Malloch, the presumptive incoming U.S. ambassador to the EU—and a dedicated opponent of the supranationalism on which the EU is based.

Patel charmed the festival with the story of her conservative upbringing as an immigrant and a shopkeeper’s daughter, while Malloch offered a soft-spoken but blunt assessment of the EU.

But not everything was happy in Bournemouth. If you want to be shocked, go here and read the story of Alexander Adamescu, who addressed the festival.

Adamescu’s father was imprisoned on spurious charges of corruption in Romania and died as a result. Now, the Romanian state—rocked over recent weeks by massive public protests against its own corruption—is seeking to use an EU mechanism, the European Arrest Warrant, to drag Adamescu off the streets of London to prison in Romania and to steal the businesses he inherited from his father.

It’s a shocking case, and far from the only one of its kind. In 2012, with a colleague, I published a Heritage Foundation report that called for fundamental reforms to the European Arrest Warrant—reforms that would have prevented the abuse of the Adamescu family. But the EU has done nothing.

That is a timely reminder that the EU is far from sweetness and light. It talks about fighting corruption, but in practice, it facilitates the abuse of the innocent by its own corrupt members.

I hope that Adamescu receives the fair play in a British court that he deserves. And like the rest of the festival, I hope that Britain’s exit from the EU puts an end not just to its legal subjugation to Brussels, but to its participation in follies like the European Arrest Warrant.

In a way, the European Arrest Warrant is a parable for the EU itself. Both are undemocratic, easily corrupted, and transfer power to bureaucrats and unaccountable elites. Thank heavens Britain will soon be rid of all this nonsense.