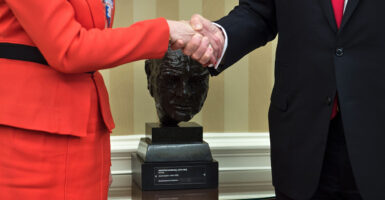 In his inaugural address, President Joe Biden pledged to “repair alliances.” Yet one of his first moves in power was to remove a bust of the late British Prime Minister Sir Winston Churchill from the Oval Office, as President Barack Obama did in January 2009.

This was a slap in the face for Great Britain on Day One of Biden’s presidency and sends the wrong signal to America’s closest friend and ally.

The Churchill bust is a sensitive issue for U.S.-British relations. The bronze bust, created by sculptor Jacob Epstein, was originally a loaned gift to President George W. Bush from British Prime Minister Tony Blair in the aftermath of the Sept. 11, 2001, terrorist attacks.

The bust is a symbol of the British people standing shoulder to shoulder with their American brothers and sisters following the worst terrorist attack in U.S. history. Another bust of Churchill, which has been on the second floor of the White House since the 1960s, is outside the Treaty Room.

When Obama decided to send the Oval Office Churchill bust back to the British Embassy within days of taking office, the move attracted a great deal of negative publicity in the United Kingdom. It was strongly condemned by then-London Mayor (and now Prime Minister) Boris Johnson.

The Churchill bust was returned to the White House when Donald Trump became president in 2017, and was in the Oval Office until this week.

The location of the Churchill bust is a sensitive issue in U.S.-U.K. relations, not least because the great World War II leader is so greatly revered on both sides of the Atlantic as a savior of the free world, but also because its removal over a decade ago suggested an impending weakening of the special relationship between London and Washington.

Indeed, under Obama, the partnership between the two allies was not as close as it was under Bush. At the time, many British conservatives viewed the Obama administration as being at best lukewarm toward Britain, and on occasion even hostile.

In April 2016, ahead of the Brexit referendum, Obama warned the U.K. that it would be at “the back of the queue” for a trade deal with the U.S. if the British people dared to vote to leave the European Union. His remarks, made in London, were seen as both insulting and an unacceptable direct intervention by the U.S. president in British politics.

To this day, Obama’s comments draw widespread derision from backers of Brexit and are viewed as a textbook example of a diplomatic disaster on the part of the White House.

Nearly five years later, Biden’s immediate removal of the Churchill bust from the Oval Office is attracting growing attention across the Atlantic and has already been strongly attacked by some British politicians, including former Brexit Party leader Nigel Farage.

Johnson has held back from directly criticizing the White House over its Churchill decision, but he is a devotee and biographer of Churchill. Many supporters of Johnson’s ruling Conservative Party will undoubtedly be dismayed by Biden’s reckless action.

There are real concerns in London that Biden may translate his antipathy toward Brexit and his well-known admiration for the European Union into a downgrading of the Anglo-American alliance in favor of appeasing Brussels and the continental European powers of Germany and France.

Such a stance would be a huge mistake.

The U.S.-U.K. partnership is the beating heart of the free world. Any move by Biden to weaken the special relationship would undermine the United States and Great Britain. Taking Churchill out of the Oval Office is the worst possible start.