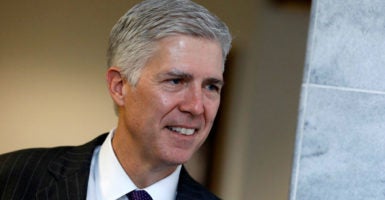 Gorsuch, a 49-year-old federal appeals judge, could potentially see these outcomes as his confirmation process unfolds:

Rachel Bovard, director of policy services at The Heritage Foundation and a former Senate aide, told The Daily Signal in an email that Gorsuch will likely get 60 votes to end debate “mostly because [Democrats] can’t seem to muster serious objections to him.”

Today I met with #SCOTUSnominee Neil Gorsuch. I urge my colleagues to put partisan politics aside & allow the vetting process to proceed. pic.twitter.com/zsBaeWlTiX

Senate Majority Leader Mitch McConnell, R-Ky., has made it clear that he intends to confirm Gorsuch in the near term, telling Politico, “We’re gonna confirm him before the April recess.”

If Republicans use the nuclear option or the two-speech rule, the 60-vote threshold to end debate would be waived and just one vote with 51 senators voting in the affirmative would be required, according to Bovard.

Minority obstruction may be curtailed by strictly enforcing Rule XIX (the two-speech rule) on the Senate floor. Doing so simply requires the Senate to remain in the same legislative day until the filibustering members have exhausted their ability to speak on the nominee in question. This is the point at which those members who are committed to blocking that nominee’s confirmation have given the two floor speeches allotted to them under Rule XIX. Once this point is reached, the Presiding Officer may put the question (call for a vote) on confirmation. The support of a simple majority of the members present and voting is sufficient for confirmation.

John Malcolm, the director of the Edwin Meese III Center for Legal and Judicial Studies and a senior legal fellow at The Heritage Foundation, told The Daily Signal in an email that he thinks it is “highly likely that Gorsuch will get 60 votes to invoke cloture and bring his nomination to the floor of the Senate for an up-or-down vote.”

Anthony L. François, a senior attorney at the Pacific Legal Foundation, also says he believes this is the likeliest scenario.

“My expectation is that Democrat leadership in the Senate will insist on a cloture vote for Judge Gorsuch’s nomination, but that the motion will receive 60 votes, and that he will then be confirmed with a range of 55 to 60 votes,” François said in an email to The Daily Signal.

According to Senate rules, 60 votes are needed to invoke cloture or end debate on the nominee.

If a filibuster is not threatened, only a simple majority, 51 votes, are needed to confirm the nominee, according to Bovard.

Carrie Severino, chief counsel and policy director of the Judicial Crisis Network, thinks Gorsuch will likely get some support from Democrats.

“It would be no surprise to me if senators in red states who are up for re-election in 2018 voted with the interest of their constituents rather than embracing the partisan gridlock [Senate Minority Leader] Chuck Schumer is advocating,” Severino said.

Malcolm says this confirmation process potentially will be less contested than that of future Supreme Court nominees.

“I think that the Democrats realize they have likely lost on this issue, and will keep their powder dry for the next Supreme Court vacancy where the stakes will be much higher,” Malcolm said. “I could be wrong, though, because [the] Democratic base is furious and may demand that the Democrats go after Gorsuch with everything they’ve got.”

My fellow members of the Judiciary Committee and I are ready to get to work to get Judge Gorsuch confirmed. pic.twitter.com/MnHZWYouSA

Bovard said it is also likely that Gorsuch will receive the 60 votes needed to end debate because Democrats from red states will be “loath to be seen as obstructionist.”

Gorsuch going down in defeat, according to Malcolm, is not probable.

Judge Gorsuch is an impressive jurist who takes seriously his obligation to interpret law & follow the #Constitution https://t.co/HPPI8NzJ3C pic.twitter.com/LcPWmdfIHE

“The only way it happens is if the Democrats mount and sustain a successful filibuster and the Republicans refuse to go nuclear or invoke the two-speech rule,” Malcolm said.

The nuclear option and the two-speech rule have never been invoked or used against a nominee for the high court, according to Bovard.

Five of the past seven Supreme Court justices received more than 60 confirmation votes and two sitting justices, Justice Clarence Thomas and Justice Samuel Alito, were confirmed with fewer than 60 votes, according to The Washington Post.

François said he believes Gorsuch has a clear path to confirmation:

His broad spectrum support from liberal as well as conservative law professors, attorneys, law school classmates, former clerks, and others has entirely overwhelmed the cartoonish opposition that left wing groups have tried to mount against him by cherry picking and misreading his opinions.

“The procedural path through confirmation may be a bit murky at the moment,” he added, “but I think we are nonetheless talking about the next Supreme Court justice to be seated.”

Gorsuch was nominated by Trump in January to fill the seat of Scalia, who died last February.