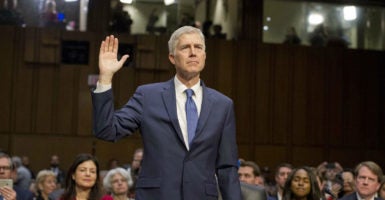 Judge Neil Gorsuch is sworn in to testify before the Senate Judiciary Committee on his nomination as Associate Justice of the U.S. Supreme Court, Monday, March 20, 2017. (Photo: Ron Sachs/SIPA/Newscom)

Members of the Senate Judiciary Committee met today to question Supreme Court nominee Neil Gorsuch in the second day of his confirmation hearing.

From the travel ban to abortion to statutory interpretation, here are some of the key exchanges between Gorsuch and the Senators.

I listen to the arguments made, I read the briefs that are put to me. I listen to my colleagues carefully. I listen to the lawyers in the well … I take the judicial process very seriously … I leave all the other stuff at home. And I make a decision based on the facts and the law.

When asked whether he could rule against the president who nominated him, Gorsuch said, “That’s a softball, Mr. Chairman … I have no difficulty ruling for or against any party.”

An independent judiciary is of utmost importance because judges should not rubber-stamp laws passed by Congress or actions taken by the president. They should be fair and impartial in reviewing each case before them.

Grassley also pointed out it is telling that the same people who have so loudly demanded that Gorsuch demonstrate his independence from President Donald Trump are the ones demanding Gorsuch tip his hand on a whole host of issues that could come before him—such as voting rights, the Second Amendment, abortion, and even the controversial travel order that’s currently being litigated.

But just as judges should not provide a rubberstamp, neither should they prejudge cases. That’s why Gorsuch, following the standard long employed by Supreme Court nominees, declined to answer many of the senators’ questions about issues that may come before him in court.

Sen. Patrick Leahy, D-Vt., brought up the travel order, asking if the president can ban someone from entering the country solely because of their religion.

Gorsuch replied, “We have a free exercise clause that protects all people … [but] I can’t apply that to anything that sounds like a case that is currently being litigated.”

He noted that we have equal protection, that due process extends to undocumented persons, and that the Religious Freedom Restoration Act “imposes a higher standard on government than the First Amendment when it comes to religious discrimination.”

Yet, Gorsuch said it would be “grossly improper” and a “violation of the separation of powers and judicial independence for someone to make promises or commitments about how they would rule in a case that’s currently pending.”

Leahy also asked if Gorsuch believed national security determinations are unreviewable. Gorsuch forcefully stated, “No man is above the law.”

He continued, “As a judge, I apply the law and the law here I think is Youngstown”—citing Justice Robert Jackson’s famous concurrence in Youngstown Sheet & Tube Company v. Sawyer, which provides the framework for evaluating claims of presidential authority.

The Role of Precedent

Quite a bit of time was spent parsing Gorsuch’s views on precedent—cases that have already been decided by the Supreme Court. Gorsuch wrote a book on this topic, “The Law of Judicial Precedent,” which describes “how past decisions guide future ones.”

At the hearing, Gorsuch explained there are several factors that judges weigh when deciding whether an old decision is still good law: the age of the decision, how much people have come to rely on it, and whether it has been reaffirmed over the years.

Judges also look at whether the decision is “an island” or instead part of a doctrine that has developed, the workability of the decision, and whether it’s too confusing for lower court judges to apply in a consistent manner.

Gorsuch described precedent as “our history” and noted that “it adds to the determinacy of law.” In his mind, judges start with a “heavy presumption” in favor of precedent, but in some instances judges may nevertheless overrule an earlier case.

This conversation about precedent, of course, laid the groundwork for senators to attempt to mine Gorsuch’s views of Roe v. Wade.

During her statement yesterday, Sen. Dianne Feinstein, D-Calif., ranking member of the committee, referred to Roe v. Wade as “superprecedent,” noting its holding had been reaffirmed more than three dozen times by later Supreme Court decisions.

Today, she asked Gorsuch if he thought it was decided correctly.

Gorsuch responded, “If it looks like I’m giving hints or previews or intonations about how I would rule, that would be the beginning of the end.”

He agreed that the decision has been reaffirmed many times but that judges “shouldn’t be required to make campaign promises” in order to be confirmed.

Later in the day, Sen. Amy Klobuchar, D-Minn., tried to get at Gorsuch’s view of Roe v. Wade in a different way. She cited Gorsuch’s remarks on the night of his nomination when he quoted Justice Antonin Scalia’s belief that if a judge always likes the outcome of cases he decides, he is probably doing something wrong.

Klobuchar asked Gorsuch to give her an example of a Supreme Court case that he doesn’t like but would uphold. Once again, Gorsuch didn’t take the bait, and explained that this would require him to forecast his views on issues he may be called upon to decide in a future case.

Even when Sen. Lindsey Graham, R-S.C., asked about the prudence of tying the legal standard for how long into pregnancies abortions may be performed to current trends in medicine and science, Gorsuch wouldn’t budge.

Feinstein appeared to be stuck in 2005. She spent most of her time asking about Gorsuch’s brief stint at the Justice Department that year and his involvement in issues related to the war on terror, torture, and the detention of enemy combatants.

When Minority Whip Richard Durbin, D-Ill., tried to back Gorsuch into a corner on LGBT issues, Gorsuch noted that he treats “each case and each person as a person, not a ‘this kind of person’ or a ‘that kind of person.’”

Sen. Al Franken, D- Minn., brought up the frozen trucker case in which Gorsuch dissented from a panel decision ruling in favor of a very sympathetic litigant despite plain statutory text that supported an employer’s decision to fire him.

Franken pointed out that there’s an exception to the rule that judges should apply the plain meaning of statutes—they can depart from the text if the result would be absurd.

But Gorsuch noted that Franken didn’t quite understand the absurdity exception and that it didn’t allow judges to ignore statutory text simply because they didn’t like the outcome.

Franken then attempted to school Gorsuch on statutory interpretation. Needless to say, Gorsuch won that round.

Sen. Ted Cruz, R-Texas, provided some levity when he brought up the Federalist Society, which Democrats attempted to paint as a shadowy interest group, and Sen. Mike Lee, R-Utah, highlighted the special relationship between law clerks and their bosses, prompting Gorsuch to turn and acknowledge several of his former law clerks sitting behind him during the hearing.

The Right Kind of Judge

After today’s marathon round of questions, Gorsuch came across as a fair and impartial judge who takes the text of laws and the Constitution seriously. It’s clear that he also is committed to keeping an open mind when approaching each case before him.

On Wednesday, the committee will convene for another round of questions. If today is any indication, Gorsuch will further demonstrate that he understands the proper role of the judiciary and that he will be a great Supreme Court justice.