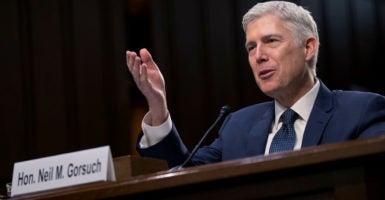 Supreme Court nominee Neil Gorsuch responded to questions about end-of-life issues Wednesday during his second day of questioning before the Senate Judiciary Committee.

“You make the statement that there is no justification for having anything to do with the end of someone’s life, encouraging the end of life,” Feinstein said. “Well, California just passed an End of Life [Option] Act.”

The End of Life Option Act, which “allows terminally ill patients to legally end their life with medical assistance,” went into effect on June 9, 2016, according to CNS News.

“I, in my life, have seen people die horrible deaths, family, of cancer, when there was no hope,” the California Democrat said, “and my father begging me, ‘Stop this Dianne. I’m dying.’”

There are times you can’t and the suffering becomes so pronounced. I just went through this with a close friend that this is real and it’s very hard. So tell us what your position is in the situation with California’s End of Life Option Act as well as what you have said on assisted suicide.

The nominee for the high court responded by pointing to comments he made about physician-assisted suicide in his book “The Future of Assisted Suicide and Euthanasia.”

In his book, Gorsuch wrote: “All human beings are intrinsically valuable and the intentional taking of human life by private persons is always wrong.”

Gorsuch said he stands by his opinion in his book that supports the Cruzan v. Director, Missouri Department of Health Supreme Court decision.

The Supreme Court ruled in Cruzan v. Director that “an incompetent person does not have the same constitutionally protected right as a competent person to refuse life-sustaining treatment,” according to the National Center for Biotechnology Information.

“What I wrote in the book was I agree with the Supreme Court in the [Cruzan v. Director decision],” Gorsuch said.

Gorsuch told Feinstein that he understands the complexity of end-of-life issues and the suffering that comes along with it.

Your father, we’ve all been through it with family and my heart goes out to you, it does. And I have been there with my dad. And others. And at some point you want to be left alone. Enough with the poking and the prodding. ‘I want to go home and die in my own bed in the arms of my family.’ And the Supreme Court recognized in [Cruzan v. Director] that that’s a right in the common law, to be free from assault and battery effectively.

Feinstein pressed Gorsuch on his views regarding physician-assisted suicide when a person is feeling intense pain.

“Supposing you cannot handle the pain, and you know that it’s irreconcilable?” Feinstein asked.

Gorsuch said he supports any measure to alleviate pain, but did not say that he would be supportive of physician-assisted suicide.

“Then Senator, the position I took in the book on that was anything necessary to alleviate pain would be appropriate and acceptable, even if it caused death, not intentionally but knowingly,” Gorsuch said. “I drew a line between intent and knowingly. And I’ve been there. I have been there.”