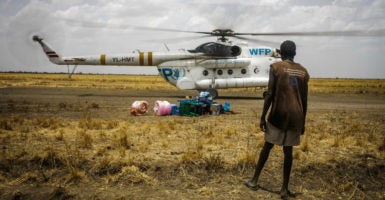 Years of internal conflicts and poor governance are not the only problems facing the African countries of South Sudan, Nigeria, and Somalia.

The United Nations recently declared famine in parts of South Sudan and Nigeria. Judging by current conditions, it won’t be long before Somalia follows suit.

The number of people affected is staggering. In South Sudan, 100,000 people are on the verge of starvation with another 5 million at risk. That number of at-risk people totals 6.2 million in Somalia—half of its population—and 4.4 million in Nigeria.

Across all three countries, roughly 1.4 million children are at imminent risk of death. Those numbers are unlikely to decrease anytime soon and could even increase in the coming weeks.

This is not the first time these three nations have faced famine and starvation. The semi-arid climates in parts of their countries make them prone to drought.

But this current famine was brought on by more than below-average rainfall. Humanitarian aid organizations and the U.S. State Department have called the famine in South Sudan “man-made.”

It is not difficult to understand why. Weather conditions may cause drought, but poor governance and instability quickly turn a drought into a humanitarian crisis.

Take South Sudan as an example.

After 25 years of war, the country gained independence from Sudan in 2011. Only 18 months later, tensions within the government plunged the South Sudanese nation into a crippling civil war that cut off South Sudan’s trade routes with neighboring countries, prevented farmers from growing and harvesting food, and caused remaining food prices to skyrocket.

A famine was narrowly averted in 2014 thanks only to a massive international humanitarian effort. However, famine looms again. Various countries have pledged help for this latest hunger crisis, but this relief may never reach the people who need it most.

The government has delayed agencies’ paperwork that would allow them to distribute aid. Soldiers have instituted military checkpoints around famine stricken areas and are preventing relief workers from crossing them.

The government is blocking aid for a number of likely reasons. It has for years stirred up anti-Western and anti-U.N. sentiment over the international community’s pressure on the government to halt its campaign of war crimes and ethnic killings. It may be blocking humanitarian aid in an attempt to retaliate.

The government is also likely blocking aid to rebel-controlled or influenced areas to punish those communities for what the government believes is their support for the rebels.

Furthermore, the government has been unable to extend its authority to much of the country.

Nigeria’s government is relatively stable, but for years it has mismanaged the fight against the ISIS-aligned Boko Haram terrorist group that at one point controlled much of northeast Nigeria. Now, that same northeast region—torn by violence and terrorism—faces the worst of this famine crisis.

As the current humanitarian crisis grows, the international community will continue to offer emergency relief, and it should. But without better governance and stability in these countries, there is only so much these efforts will achieve.

Note: This article has been updated to correct the location of Nigeria that Boko Haram once largely controlled.