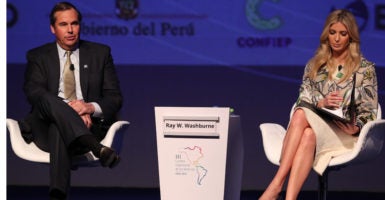 Ivanka Trump, the president's daughter and adviser, listens to remarks by Ray Washburne, president and CEO of the Overseas Private Investment Corporation, during their April 13 appearance at the third CEO Summit of the Americas in Lima, Peru. (Photo: Ernesto Arias/EFE/Newscom)

In an op-ed for CNBC, Commerce Secretary Wilbur Ross and Sen. Chris Coons, D-Del., urge Congress to approve a bill that would rebrand and double the size of the Overseas Private Investment Corporation.

They argue that the Better Utilization of Investments Leading to Development Act, or BUILD Act, would help the United States offset the influence China allegedly buys in Africa though its neomercantilist, trillion-dollar Belt & Road Initiative. They imply that the BUILD Act would encourage U.S. companies to “pour money” into African countries to counter China.

Based on the track record of the Overseas Private Investment Corporation, however, that is doubtful.

In 1971, Congress created OPIC (in Section 231 of the Foreign Assistance Act) to “mobilize and facilitate the participation” of American companies in investing in developing countries that are moving from nonmarket to market economics—a perfect description of much of today’s sub-Saharan Africa.

As of fiscal year 2018, the agency’s data show it has dedicated 27 percent (or $6.28 billion) of its portfolio to Africa. The share of its portfolio going to Africa has increased over the past decade, but half of that investment focused on projects in three countries—Ghana, Kenya, and South Africa.

One can argue about the effectiveness of those projects, but it is instructive to note that none of those three countries has made appreciable progress toward a freer economy, as measured by their rankings in the Index of Economic Freedom from 1995 to the present.

This concentration of OPIC activity in relatively wealthy African countries is unsurprising. According to a Heritage Foundation analysis of that agency’s portfolio, as of March 2018:

Moreover, the Overseas Private Investment Corporation’s portfolio shows it is not particularly active in the sectors China has focused on—construction, transportation, mining, oil, and gas. Even where there is overlap between Chinese investment and its portfolio, such as in power generation, China focuses primarily on coal and oil power, and OPIC focuses on renewable energy sources.

Why would Ross and Coons think the BUILD Act would change this pattern? The statutory language does not even mention China, nor require the new U.S. International Development Finance Corporation, which it creates, to counter Chinese influence.

This $60 billion new agency—tiny compared to China’s program—would not be required to target Africa with any fixed percentage of loans, focus on sectors of great interest to China, or advance any specific U.S. foreign policy or national security objectives.

Nothing in the legislation, even as revised by House and Senate committees, would force the new IDFC to focus its resources differently than OPIC has in the past.

If Ross and Coons truly want to position American companies to “pour money” into African countries to compete with China (a questionable strategy at best), they will need to work with Congress on further revisions to the BUILD Act to guarantee that outcome to taxpayers.

Spencer McCloy and Vincent Miozzi, members of the Young Leaders Program at The Heritage Foundation, contributed to this commentary.