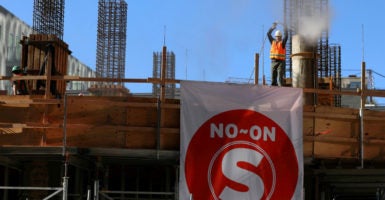 A Los Angeles construction worker works on site by a "No on S" campaign sign expressing opposition to Measure S. (Photo: Mike Blake/Reuters/Newscom)

The cost of living in Southern California dodged a bullet on Tuesday when Los Angeles voters rejected ballot measure “S.”

The measure would have made it much more difficult to build any new housing in America’s second-largest city.

Zoning laws and building restrictions rarely make national headlines, but they impose a substantial barrier to new investment, and new investment has been the missing link in the slow-growth economy of the 2010s.

Housing in California is already so expensive that tens of thousands of low-income residents leave the state annually for cheaper climes.

Heritage Foundation research on the costs of local land use regulation estimated that average Angelenos would save $94 a month on rent if the city adopted less restrictive housing regulations. Instead, they were tempted to go in the opposite direction.

The “Yes on S” campaign, which favored extreme restrictions on new construction, used the motto “Save our Neighborhoods.” Strangely, the campaign received most of its financial support from the AIDS Healthcare Foundation. Labor unions and property developers opposed the measure.

Given the persistently high demand for living in sunny L.A., restricting supply in that way would have raised prices substantially.

The neighborhoods might have been “saved” in the sense that they would look cosmetically similar, but the restriction of supply would have pushed prices up rapidly in previously working-class neighborhoods. Low-income renters and retirees would be priced out.

San Francisco has already gone down the anti-building path. The result is that more than half of homes in the Bay Area now cost over $1 million.

Tokyo, by contrast, has shown how to maintain affordability, even in a big city. By maintaining strong individual property rights, Tokyo’s policymakers have kept housing costs basically constant despite strong demand.

The defeat of Measure S is also good news for wages and job creation. Without new investment, jobs cannot be created nor wages increased.

Since half of business investment is in buildings—those factories and offices need to go somewhere, after all—Measure S would have made it more difficult to create jobs in L.A.

Free marketers and affordability advocates worked together to defeat Measure S. Perhaps they can go further next time and roll back some of the restrictions that have made L.A. so expensive in the last 30 years.