The 5 Bills House Conservatives Plan to Push Before Election 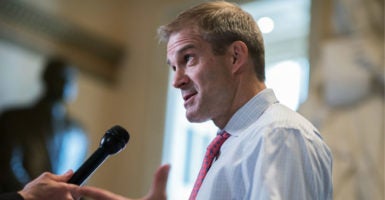 Protecting religious liberties, keeping Americans secure from foreign and domestic threats, and holding government accountable are the goals of the House Freedom Caucus for 2016.

The members of the Freedom Caucus held a press conference Wednesday to unveil their policy priorities. Five bills were at the forefront of the proposal.

Rep. Jim Jordan, R-Ohio, chairman of the Freedom Caucus, said the five bills are specific priorities that can be passed before the presidential election and reflect what the American people want.

“So to the American people, we say we hear you,” Jordan said. “We want to spend more time on legislation that will restore and protect your freedoms, and we do have time to take action this fall. And the House Freedom Caucus is committed to doing so.”

Here is a recap of each bill:

Introduced almost a year ago, the First Amendment Defense Act aims to protect individuals and organizations who hold traditional views about marriage. A hearing was held Tuesday on the bill in the House Oversight and Government Reform Committee.

Rep. Raúl Labrador, R-Idaho, sponsored the legislation that would prevent those with traditional views of marriage from being denied federal grants and loans, tax-exempt status, or from being fired from the federal government.

“This bill does not alter anything or modify any civil rights protections or negate any federal anti-discrimination laws,” Labrador said at the press conference. “It’s really important to read the bill. A lot of the testimony yesterday in committee was refuted just by a simple reading of the bill.”

Jordan sponsored the bill, but Rep. Mark Meadows, R-N.C., discussed it at the press conference Wednesday.

Sponsored by Rep. Gary Palmer, R-Ala., the Agency Accountability Act would require all federal agencies—except for the the U.S. Postal Service and Patent and Trademark Office—that collect money directly through fines, fees, penalties, or settlements to deposit that money in the general fund of the U.S. Treasury.

Palmer called it a “step toward restoring constitutional government,” as Article 1, Section 9, of the Constitution says money can only be drawn from the Treasury by an appropriation of Congress.

The Resettlement Accountability National Security Act would suspend the admission of refugees into the United States until Congress passes a joint resolution that gives the secretary of Homeland Security the authority to continue to admit refugees.

Sponsored by Rep. Brian Babin, R-Texas, the act would also require the comptroller general to submit a report examining the costs of providing benefits to refugees. The report would have to be submitted within 90 days after the bill passes into law and would look at data over the last 10 years.

The bill was introduced last year and has been referred to the House Judiciary Subcommittee on Immigration and Border Security.

Originally introduced as the Abortion Non-Discrimination Act in 2011, the Conscience Protection Act is intended to prevent discrimination against providers of health services who decline involvement in abortion.

As an example, the bill, which the House passed Wednesday, mentions how California’s Department of Managed Health Care requires coverage for all elective abortions in all health plans. Despite members of Congress having questioned the Department of Health and Human Services surrounding California’s decision, the issue has not been resolved. The bill would address this and similar issues.

“Remember, the majority of Americans today are pro-life,” Rep. John Fleming, R-La., said at the press conference. “But even a greater majority believe that even if it is a woman’s choice, that they shouldn’t be forced to participate or to fund what is someone else’s choice in taking the life of a preborn human being.”