Assimilation, Not ‘Integration,’ Prevents Young Immigrants From Turning to Terrorism 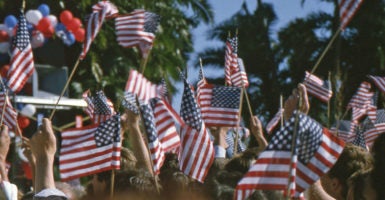 A respected sociological study found that over time, immigrant children experience a shift in identification “toward a more militant reaffirmation of the immigrant identity," corresponding to a diminishment in American self-identity. (Photo: iStock Photos)

Whoever leaked a Department of Homeland Security document showing that children of immigrants raised in America radicalize at a higher rate than do their parents was clearly trying to thwart the Trump administration’s vetting plans.

But what the leak accomplished was to confirm that our patriotic assimilation system is broken to the point that it is now a national security threat.

That the DHS document was leaked to the main doyenne of liberal orthodoxy at MSNBC, Rachel Maddow, was a further ironic twist. It was liberals who deliberately broke the system.

The Trump administration is going to have to get the leakage situation under control, lest Obama-era embeds in the deep government sabotage all its projects. In the meantime, let’s follow the evidence where it leads.

The document, leaked Thursday, is an assessment of the “radicalization of 88 foreign-born, U.S.-based persons who participated in a terrorism-related activity inspired by at least one named foreign terrorist organization.” Included is a review of 116 terrorists born in America, many of whom “had similar experiences and grievances to the 88 foreign-born.”

Both the foreign-born and the native-born terrorists looked at in the study were indicted or killed between 2011 and 2016.

Most of the foreign-born terrorists in the study “likely radicalized several years after their entry to the United States, limiting the ability of screening and vetting officials to prevent their entry.” That last bit, a truism, would obviously apply to the native-born as well.

Most of the terrorists overall had been here for at least a decade before they were indicted or killed.

Nearly half of the foreign-born terrorists were under 16 years of age when they came to the United States. Demographers usually refer to this cohort as the “1.5 generation,” to differentiate it from first-generation immigrants who came here as adults and have not had their views and outlooks molded by our schools, media, and other institutions.

That distinction is important. Something about the way they are instructed, or entertained, in this country makes them more likely to want to harm people, not less.

Given limited resources, DHS could not identify all the factors motivating radicalization but speculated that they include “perceived injustices against Muslims” and isolation from mainstream society.

To correct that isolation and disaffection, DHS suggests, integration and mentoring services provided to refugees and asylees should be continued, as well as so-called Countering Violent Extremism programs that focus on integration.

Except they haven’t achieved their aim.

“Integration,” which is generally used to mean that individuals understand how the U.S. economy functions and how they can fit into it, is no substitute for “assimilation,” which is the cultivation of patriotic feelings for a country and of cultural commonality with its people.

People die for God and country, not for an economic system. The key is identity.

People die for God and country, not for an economic system. The key is identity.

Turkey’s president, Recep Tayyip Erdogan, understands the difference between integrating and assimilating. He tells Turkish immigrants to other countries to do the former but not the latter. In Dusseldorf in 2011, he told them, “Yes, integrate yourselves into German society, but don’t assimilate yourselves.”

In 2011 in Munich, he told a gathering that the tendency of many young Muslims in the West to take up terrorism “comes down to a question of identity. These young men find it hard to identify with Britain because we have allowed the weakening of our collective identity.” Writing in the Times of London, Cameron added that “all too often, because of what I would call ‘passive tolerance,’ people subscribe to the flawed idea of separate development. It is time to change our approach.”

Separate development is what our schools teach, however.

In what many consider the gold standard of academic research on this subject, sociologists Alejandro Portes and Rubén Rumbaut find that students experience a shift in identification after four years of high school, “toward a more militant reaffirmation of the immigrant identity.” Self-identification as “American” diminishes over time.

Children of immigrants, they say, seem “to adopt the ethnoracial markers into which they are persistently classified by the schools and other U.S. institutions.”

We have long known that this separateness is the problem. It wasn’t necessary to leak the report to make the case that the predominant terrorist threat to America is homegrown.

Joshua Meservey of The Heritage Foundation wrote in December that the 1.5s “may not fully identify with either their parents’ country or their adopted country. This can lead to a sense of isolation and aimlessness, which is a risk factor for radicalization.”

The Heritage Foundation has long maintained a publicly available database of Islamist terror plots aimed at the U.S. since 9/11. It shows an unmistakable trend: Plots are dominated by homegrown threats.

That brings us to a further irony, which is that the information in the DHS report is neither new nor terribly helpful in rebutting the president’s executive order banning travel from troubled Middle East countries.

The leaked document does not address the stated purpose of the executive order, which is to blunt future threats, not to deal with the present homegrown threat (which requires other measures, such as assimilation).

As ISIS loses ground, the tens of thousands of foreign fighters who retreat will have to go somewhere. The countries to which they are most likely to migrate are designated in the executive order.

The objective of the order is to prevent foreign fighters from using those countries as a base from which to travel and launch terrorist attacks here.

But for today, if we allow the weakening of our collective identity, and separateness is what we teach, can anyone, including Maddow, expect anything else than radicalization of people brought up here in America?

This op-ed was originally published in National Review.