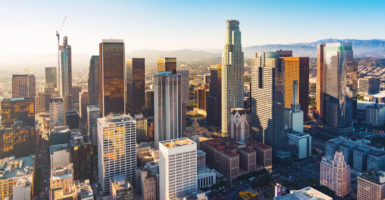 The initiative would be on the ballot in California during the 2020 presidential election.

“We’re launching a voter initiative to overturn SB 54, which is the sanctuary state law, and actually require law enforcement in California to cooperate with federal immigration authorities,” Rosenberg said. “Clearly it is a blight on public safety. I mean, releasing criminals back into the community and then these people telling us that that’s going to make cities safer is outrageous and ridiculous.”

The initiative would require local law enforcement to notify federal authorities when they have an illegal immigrant in custody, would prevent the DMV from issuing driver’s licenses to illegal immigrants, and would require local law enforcement to cooperate with the federal government. It would also require voters to show proof of residency before they cast their ballots.

Rosenberg said he is confident voters will approve the measure.

“We’re entirely confident,” he said. “I mean, there have been some surveys done. There was just one done recently where only 11 percent of the population agreed with sanctuary policy. And we think once we’re out there and we’re really talking the truth about what this law is, that the numbers will even get greater.”

“Many Californians are justifiably outraged by Sanctuary State laws and have focused on repealing SB 54,” the statement reads.

“Our proposed initiative would accomplish this. But simply repealing those two laws will not fully address the scope of the problems Californians face as a result of mass, unchecked illegal immigration. Long before SB 54, ‘sanctuary’ jurisdictions in California have obstructed federal immigration enforcement, and with each legislative session illegal aliens are given more privileges by state lawmakers. These laws and policies must also be rolled back—and prohibited in the future,” the statement continued.