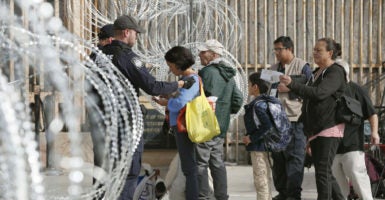 Migrants from Central America have their backgrounds checked at the border in Tijuana, Mexico, Nov. 19, 2018. (Photo: Kyodo/Newscom)

U.S. District Court Judge Jon Tigar said that Congress extended asylum eligibility to all comers, and the president may not impose contrary terms.

“Whatever the scope of the president’s authority, he may not rewrite the immigration laws to impose a condition that Congress has expressly forbidden,” Tigar’s decision reads. Tigar is an Obama appointee to the federal trial court in San Francisco.

President Donald Trump issued an order on Nov. 9 denying asylum for all foreign nationals who enter the country illegally for a 90-day period. The American Civil Liberties Union challenged the proclamation in court, arguing it violates the Immigration and Nationality Act and the Administrative Procedure Act.

That language is consistent with treaty obligations under the 1967 U.N. Protocol Relating to the Status of Refugees, to which the U.S. is a party.

Taken together, Tigar said that the refugee treaty and the plain language of the law indicate that Congress never meant to deny asylum claims from illegal aliens.

“Considering the text and structure of the statute, as well as the interpretive guide of the U.N. Protocol, reveals Congress’s unambiguous intent,” Tigar wrote. “The failure to comply with entry requirements such as arriving at a designated port of entry should bear little, if any, weight in the asylum process.”

The decision may be appealed to the 9th U.S. Circuit Court of Appeals.

The Trump administration argued that illegal aliens may retain the right to apply for asylum, but the government may use their unlawful entry as the basis for denying the request. Tigar acknowledged that the manner of arrival may play some role in assessing asylum pleas, but added that the administration’s position rendered federal law “a dead letter.” The government elsewhere argued that many asylum applications are meritless.

The temporary restraining order will remain in effect until Dec. 19. The overnight order followed arguments in the dispute just 12 hours prior.

“This ban is illegal, will put people’s lives in danger, and raises the alarm about President Trump’s disregard for separation of powers,” ACLU attorney Lee Gelernt said after Tuesday’s decision. “There is no justifiable reason to flatly deny people the right to apply for asylum, and we cannot send them back to danger based on the manner of their entry. Congress has been clear on this point for decades.”