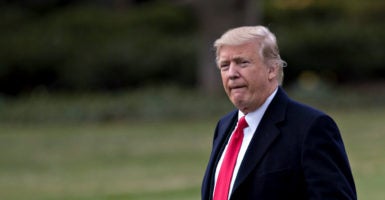 Last month, the Senate voted to use the Congressional Review Act to undo an Obama-era regulation issued by the Interior Department.

In response, the director of the department’s Office of Surface Mining Reclamation and Enforcement told Politico, “I believe there’s a good chance that […] a court will overturn Congress’ actions here as an unconstitutional usurpation of the executive branch’s powers.”

The constitutional illiteracy of this statement is simply breathtaking—and it would be funny, too, if it weren’t so prevalent within the federal government today.

Article I of the U.S. Constitution begins, “All legislative power herein granted shall be vested in a Congress of the United States.” And Article II obligates the president and his executive branch to “take care that the laws be faithfully executed.”

And for more than the first hundred years of our republic, that is largely how it worked. Congress passed laws and the executive branch enforced them.

But in his first inaugural address, President Franklin Delano Roosevelt called for constitutional change. He claimed the Great Depression should be treated as an “emergency of war,” requiring a “temporary departure from the normal balance of public procedure.”

Unfortunately, our government has been not-so-temporarily departing from the normal balance of public procedure ever since.

But it wasn’t until Roosevelt died and President Harry Truman came to power that the government adopted a more systematic and codified framework that set the ground rules for America’s burgeoning administrative state. The cornerstone of this framework was the Administrative Procedures Act.

Under the Administrative Procedures Act, Congress could delegate broad lawmaking powers to executive branch agencies. To adjudicate this new and delicate sharing of lawmaking authority, the courts had the jurisdiction to review the propriety and scope of agency rule-making.

At the same time, in an effort to retain as much of its legislative authority as possible, Congress began inserting more and more “legislative veto” provisions into these otherwise broad grants of power.

This framework was not completely static over the next 40 years, but in the 1980s two Supreme Court cases fundamentally changed the balance of power between the branches: INS v. Chadha and Chevron U.S.A. v. Natural Resources Defense Council.

Taken together, these two cases caused a substantial transfer of power from the legislative and judicial branches to the executive branch. The result is an executive branch that has grown far too powerful and insulated from public control.

But there are three pieces of legislation that would go a long way toward reinvigorating the separation of powers at the heart of our constitutional system.

First, the Regulations from the Executive in Need of Scrutiny Act (REINS Act) would help restore the balance between the executive and legislative branches by requiring congressional approval for any new regulation that would have a major impact ($100 million or more) on the economy.

Finally, the Agency Accountability Act would make federal agencies accountable again by directing most fines, fees, and unappropriated proceeds to the Treasury, instead of letting federal agencies keep and spend them as they see fit.

With President Donald Trump in the White House, elected on a promise to “drain the swamp,” we have a unique opportunity to pass all three of these bills.

Doing so would constitute a fundamental shift of power in this country—a transfer of power, to paraphrase Trump’s inaugural address, not merely from one party to another, but from Washington, D.C., back to the American people.