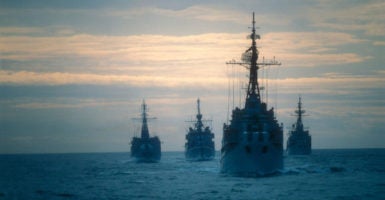 In 1990, with the fall of the Soviet Union and following eight years of military buildup under President Ronald Reagan, the American people seemed to agree: The United States was spending enough on the military.

Fast forward to 2017, and it’s obvious that sentiment has gone the way of the dinosaurs.

A Gallup poll released Thursday found that 37 percent of Americans believe the United States is not spending enough on the military, with 28 percent saying defense spending levels are “about right” and 31 percent saying spending is too high.

Nearly half of those polled (45 percent) also said they believed the U.S. military is “not strong enough,” compared to 11 percent who said the military is “stronger than it needs to be.” This result tracks closely with a Gallup poll from February 2016 in which only 49 percent of those surveyed thought the U.S. military was the most powerful worldwide.

Gallup noted that the 49 percent figure was the lowest recorded number in the polling group’s 23 years of tracking.

What these polls demonstrate is that the shortfalls facing the U.S. military are not just seen and recognized by military leaders, but by Americans across the nation. Given the state of military readiness and lack of modernization after years of sequestration and budget cuts, it is little wonder that public opinion continues to trend this direction.

In real constant dollars, the Department of Defense’s budget has declined 24 percent since 2011. Meanwhile, our enemies around the world have continued to enlarge their forces, modernize their equipment, and in some cases, engage in aggression against America’s allies.

By any measure, America is not spending enough to sustain its military in these times of increasing global threats.

As The Heritage Foundation reported in its 2017 Index of U.S. Military Strength, in the last five years as a result of diminishing budgets and operational overuse, the military has been sorely depleted.

Only three of the Army’s 58 brigade combat teams are ready to fight today. One-quarter of naval aircraft are flyable, and the Air Force is suffering from crippling pilot and maintenance personnel shortages.

Major weapon systems are aging and not being replaced. The average age of Air Force aircraft is 27 years old, while the Army has not been able to replace its main battle tank, already 37 years old.

>>>Defense Leaders Agree: US Military Readiness Is at a Dangerous Low

President Donald Trump has proposed a defense budget of $603 billion for fiscal year 2018, which on paper would increase defense spending by $54 billion. However, the Obama administration had already planned to spend $584 billion in 2018, and the military services have already prepared detailed plans to spend that amount.

A 2018 budget of $603 billion is about an $18 billion increase in the defense budget. While this is a welcome down payment on beginning the process of rebuilding the military in the coming years, it will not be enough to regrow the military, rebuild near-term readiness, and begin much-needed modernization programs.

Lawmakers would be wise to push for a defense budget of around $632 billion.

The primary purpose of government is to care for and defend its citizens. What Gallup has shown is that those citizens believe the government needs to do more.

Hopefully, Congress and the administration can work together to provide the necessary funds in 2018 to begin rebuilding the military.