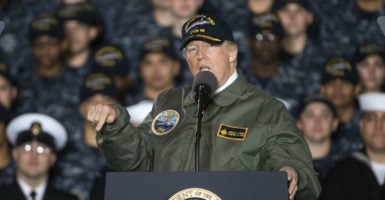 In a speech on board the next-generation aircraft carrier USS Gerald R. Ford, President Donald Trump pledged to rebuild the U.S. Navy fleet, eliminate cuts to our national defense, and “give the men and women of America’s armed services the resources you need to keep us safe.”

His remarks are a welcome tone of greater commitment to the U.S. military, which has struggled under budget cuts in recent years. It will take a focused, long-term commitment by both the president and Congress to make good on these pledges.

Trump called the USS Gerald R. Ford a “monument to American might that will provide the strength necessary to ensure peace” and said, “This carrier and the new ships in the Ford-class will expand the ability of our nation to carry out vital missions on the oceans to project American power in distant lands.”

Both comments hearken back to President Ronald Reagan’s philosophy of peace through strength, but today’s Navy needs more support from the government to fulfill it.

Trump has called for a 350-ship Navy as one pillar of rebuilding the military. This closely matches the recommendations of both The Heritage Foundation’s Index of U.S. Military Strength (346 ships) and the Navy’s recent update to its own fleet requirements (355 ships). All three represent a more realistic assessment of the threats and challenges the Navy faces and the resources it will need to meet them.

Unfortunately, due to chronic underfunding of the Navy’s shipbuilding and maintenance accounts, the fleet currently stands at 275 ships—a fifth less than what the president has called for.

This underinvestment has resulted in a Navy that is stretched dangerously thin. Though the fleet has declined from over 400 ships in the early 1990s (a result from the Reagan buildup), maritime threats around the world have arguably grown over that time. Thus, the Navy finds itself in greater demand with fewer ships.

This in turn has caused two issues for the Navy.

First, the fleet simply cannot be where it needs to be everywhere in the world. This was starkly evident over Christmas of last year when the Navy was unable to deploy a carrier to the Middle East for a month due to an unforeseen maintenance issue.

This might not have as gravely affected carrier deployments if the fleet had 12 carriers as recommended by Trump and the Navy, but today there are only 10. The Navy simply cannot sustain its high rate of operations without increasing the size of its fleet to account for such mishaps.

Budget cuts have also strained the Navy’s ships and crews as they try to do more with less. Extending deployments beyond the normal six months has become a common occurrence, which puts unnecessary stress on the fleet in a number of ways.

First, ships are sailing for longer stretches than expected, essentially adding mileage to the hulls more rapidly. Second, because they are out to sea longer, they consequently have less time to receive needed depot maintenance and repair work.

Finally, sailors that already work in a high-demand environment are now being asked to stay out to sea and away from their families longer than expected. The Navy therefore finds itself both less able to provide global presence and overworked because its fleet has shrunken so far below what is required.

Trump expanded on his remarks to Congress Tuesday about reinvesting in the military, saying, “By eliminating the sequester and the uncertainty it creates, we will make it easier for the Navy to plan for the future and thus to control costs and get the best deals for the taxpayers.”

For all the services and the Navy in particular, this is a key point. Without predictable, robust budgeting, programs like aircraft carriers suffer delays and cost overruns that could have been prevented.

Furthermore, with projects on a scale as massive as shipbuilding, stable long-term funding enables shipbuilders and their supplier companies to plan years ahead, make use of economies of scale, and otherwise reduce overall costs.

A combination of defense cuts and Congress’ failure to pass normal budgets has made such efficient practices more difficult.

The Navy has a long way to go before reaching its needed fleet size. Yet with concerted effort and persistence, the president and Congress can in the coming years begin to rebuild the fleet and the other armed services.

As the military continues to operate at a high rate to protect America’s security and interests around the globe, our elected leadership owes it to those service members to provide them the tools they need to succeed.