Why Trump Should Fund This Vital Diplomatic Program, Despite International Cuts 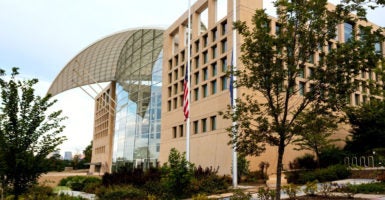 The U.S. Institute of Peace employs staff in Washington, D.C., and around the world who engage in conflict zones and provide research and resources to bolster peace efforts. (Photo: Ingram Publishing/Newscom)

As the Trump administration considers cuts to the budgets of the State Department, U.S. Agency for International Development, and other international affairs agencies, it must not sacrifice programs that are tangibly preventing conflict and promoting peace.

As Defense Secretary James Mattis was quoted as saying when he served as CENTCOM commander, “If you don’t fully fund the State Department, then I need to buy more ammunition.”

What he means is that the less time and resources the U.S. spends on building peace and resolving conflict now, the greater the chances the U.S. will become embroiled in military conflict in the future.

As our Heritage Foundation colleague Brett Schaefer pointed out in a recent blog post, there is a need to streamline operations at the State Department and other nondefense agencies, and some of the foreign affairs programming instituted during the Obama years is indeed irrelevant to core U.S. national security goals and must be cut.

We argue that one option for trimming the State Department’s budget that would be less disruptive in the immediate term would be to gradually apply reductions over several years.

The Institute of Peace is a federally-funded, nonpartisan, and independent institution that employs staff here in Washington, D.C., and across the world to engage in conflict zones and provide research and resources to those working for peace.

The institute provides small-scale grants for research, and carries out programs that directly counter Islamist extremism in some of the most dangerous parts of the world.

Both of us had the opportunity to see the institute’s work up close during a trip to Pakistan last year. We visited the institute’s small office in the heart of Islamabad and heard about its efforts to work with elements of Pakistani society that are facing down Islamist hard-liners.

Its work is real and having a tangible impact, and is certainly not without risk.

In addition to being a “do-tank” carrying out practical programs, often in hostile environments, the Institute of Peace also engages in the traditional work of a think tank, and provides a unique contribution to U.S. foreign policy goals.

The Heritage Foundation has partnered with the Institute of Peace on several occasions, most recently to co-host Pakistani leader Bilawal Bhutto, son of the late Benazir Bhutto, who was assassinated by Islamist extremists in 2007.

There was not an empty seat in the auditorium as people listened to Bhutto’s message of pursuing a moderate, peaceful, and democratic future for his country that is currently battling the scourge of terrorism. Just last week, a series of terrorist attacks wracked the country, killing over 100.

Trimming spending at U.S. foreign affairs agencies should not translate to undercutting the U.S. ability to prevent conflict, counter Islamist extremism, and partner with those who are fighting for the values of individual freedom and liberty in the most volatile regions of the world.

Prevention is still the best medicine, particularly when it comes to U.S. foreign policy and national security.