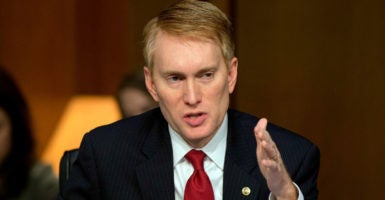 Doctors can't "look over the shoulders of someone and tell exactly how long they [will] live," says Sen. James Lankford, R-Okla., speaking on the societal dangers of physician-assisted suicide at The Heritage Foundation. (Photo: Ron Sachs/dpa/picture-alliance/Newscom)

Allowing physicians to help people kill themselves is a misguided “game-changer” in how society responds to suffering, a doctor who specializes in children’s medicine said during a Heritage Foundation event on assisted suicide.

“Physician-assisted suicide redefines the concept of a medical good as never before,” Dr. G. Kevin Donovan, professor of pediatrics and director of clinical bioethics at Georgetown University, told the audience for the panel discussion.

“For the first time, we will plan to end suffering by ending the life of the sufferer,” Donovan said.

The event Monday, which featured Sen. James Lankford, R-Okla., a sponsor of legislation on the topic, focused on the societal dangers of physician-assisted suicide.

Ryan T. Anderson, a senior research fellow at Heritage, called the widespread legalization of the practice “a grave mistake.”

So far, five states plus the District of Columbia have legalized physician-assisted suicide. But, Anderson noted, 16 other states have introduced bills to allow it.

Anderson was host of the event along with Kathryn Jean Lopez, a senior fellow at National Review Institute.

Lankford said the issue is personal for him because someone in his own family could be targeted by proponents of assisted suicide. Their standard for proceeding, he noted, is a diagnosis that someone has six months or less to live.

“I have a very dear family member … given a diagnosis of six months to live in 1981, and she is still kicking and is still a pretty amazing lady,” Lankford said.

So the standard is presumptuous, the Oklahoma Republican said:

This belief that somehow medicine can look over the shoulders of someone and tell someone exactly how long they [will] live begs the reality of just everyday care for individuals and … quite frankly, for those of us who are followers of God, just the belief in what God can choose to do in the life of an individual and the dignity of that person.

Before the District’s physician-assisted suicide law went into effect Feb. 18, Lankford introduced a resolution attempting to halt its implementation.

Donovan also said it is impossible for his fellow doctors to be completely accurate in judging the lifespans of patients because it is not something they have been trained to do.

“There are at least a couple of things that doctors do not do well,” Donovan said. “And the first one is prognosticate the end of someone’s life because actually, we do not have much training in that and we do not have much data. Every patient is an individual.”

Also on the panel was Melissa Ortiz, the founder of Able Americans, an organization that seeks to give a voice to those with chronic illness and physical and mental disabilities. Ortiz said her own neurological disability helped convince her that society must reframe the discussion:

We have got to change the conversation from talking about ‘the elderly’ and ‘the disabled’ to talking about people who are elderly and people with disabilities. When you take away that little ‘the’ … they become individuals with stories. Putting the ‘the’ in front of it makes them objects and objectifies them; dare I say, it makes them subhuman.

Ortiz said she has experienced the reality of the “disabled” label.

Advocates of physician-assisted suicide think that my life isn't worth living…that is not acceptable to me — Melissa Ortiz pic.twitter.com/CtcuhXYvAc

“I cannot tell you the number of times that people have addressed [my husband] to ask what I would like,” she said. “And before that they would ask my mother or my friends, because I couldn’t possibly answer for myself because I am in a wheelchair.”

Ortiz said her family also was faced with a situation with a loved one where caring action made all the difference.

Her father-in-law battled prostate cancer, which spread to the bone, and did not have “great doctors,” she said:

Suffering and illness, Ortiz said, can be a way to “walk in victory”:

Kathleen Buckley Domingo, also on the panel and associate director for the Archdiocese of Los Angeles Life Ministry, said she is alarmed at how physician-assisted suicide has been handled in her state.

Thanks to everyone who participated in doctor-prescribed suicide discussions in DC today @NR_Institute @Heritage @CICDC pic.twitter.com/NlutKEMwiG

Supporters of physician-assisted suicide, including Compassion & Choices, an organization advocating its legalization across the nation, argue that terminally ill individuals should have the choice to “end their suffering if it becomes intolerable.”

Donovan said choosing death by opting for assisted suicide may be the least expensive path to take, but is dangerous for patients and physicians.

“In medicine we know that what is permissible becomes habitual, and what is habitual becomes standard care, and what is [the] standard of care becomes obligatory,” Donovan said. “We will be changing the standards of care for all physicians and all patients by changing this law for society and the profession.”