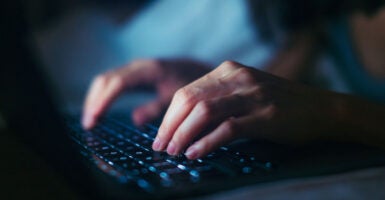 Leaders from the Office of the Director of National Intelligence, FBI, CIA, National Security Agency, and Defense Intelligence Agency will testify this week before the Senate and House Selects Committees on Intelligence regarding their assessments of worldwide threats. (Photo: Oscar Wong/Getty Images)

Leaders from the Office of the Director of National Intelligence, FBI, CIA, National Security Agency, and Defense Intelligence Agency will testify this week before the Senate and House Selects Committees on Intelligence regarding their assessments of worldwide threats.

Topics will surely range across the spectrum from the ongoing threat of a nuclear Iran, the great power competition with nation-state actors such as China and Russia, the future of the U.S. presence in Afghanistan, foreign and malign influence campaigns, and domestic extremism.

Technological threats have always been a part of the discussion when assessing global threats, but now they are at the forefront as technology continues to change the ways in which the world works. Technology is also giving American’s adversaries, both nation-state and non-state actors, new advantages.

Here are a few questions and thoughts, and by no means an exhaustive list, that members of Congress and leaders in the intelligence community should focus on:

Space – The U.S. continues to see increased activity from foreign countries, both government and private, in space. Most recently, the U.S. Space Force was integrated into the intelligence community as a part of the Trump administration’s broader recognition of the dangers arising within the theatre. For example, U.S. Space Command last year noted a Russian space-based anti-satellite weapons test that could directly threaten U.S. and allied space assets.

Where do we see adversarial technologies moving that will threaten infrastructure belonging to both the U.S. government and private entities? What whole-of-government approach are we doing to prioritize both the development of future space technologies as well as defend against advanced counterspace threats by our adversaries?

Defending the high ground is paramount within the military community. The technological advancements and new actors within space offer that the new high ground to defend has been established and must be protected, for both national security and future commerce.

Artificial intelligence, quantum computing, and workforce capabilities – Nations continue to see significant growth in artificial intelligence, machine learning, and quantum computing for both government and commercial means. These pose serious capability and ethical questions that we continue to grapple with but must work expeditiously as threats grow abroad on this front.

Advancements by actors such as China threaten government encryption capabilities and allow for adversary development of new weapons systems, such as hypersonics that challenge our offensive and defensive capabilities.

In recent years, stories regarding the unwillingness of technology company employees to work with U.S. defense and intelligence agencies on artificial intelligence capabilities have come into question when viewing the gains by our adversaries in this space.

What areas of investment, including reductions of bureaucratic and regulatory barriers within the government and private sector, need to be addressed to not only keep U.S. ahead in this technological arena but lead to breakthroughs to secure our technological superiority? How is the intelligence community harnessing artificial intelligence, as well as open-source capabilities, to modernize our collection and analyzation practices?

How do we view the relationship between government partners and U.S. technology agencies at the moment, and what could improve those relationships? What policies need to be changed to properly recruit and maintain the skilled workforces to tackle the technological challenges that face our government and country?

What do broader moves to end-to-end encryption mean for the intelligence community and domestic, lawful access law enforcement against threats to the U.S.? The FBI has received significant pushback from technology companies claiming to be pressed for so-called “backdoor” capabilities. How does the FBI see the debate on lawful access and our capabilities to thwart threats to the homeland or court-ordered investigations while allowing strong privacy and data protections for everyday users of their personal information? Is end-to-end encryption damaging our foreign intelligence insights to threats emanating from overseas?

Cyber threats – The U.S. has seen several massive cyber incidents within the last six months, including the SolarWinds, Cozy Bear, and Hafnium incidents. We must grapple with the fact that we are seeing significant breaches of our government and private sector networks from the use of software supply chain and domestic virtual private network infrastructure within our own country.

Director Nakasone recently testified that “…our adversaries understand that they can come into the United States and rapidly utilize an internet service provider, come up and do their activities, and then take that down before a warrant can be issued [and] before we can actually have surveillance by a civilian authority here in the United States.”

Recently, former secretary of defense and director of the CIA, Robert Gates, called for the use of a dual-hat structure with an assigned Department of Homeland Security senior officer co-located as a deputy director at the NSA that would primarily focus on separate taskings under different authorities to defend cyberattacks of domestic origin. Others say the primary focus needs to be on stronger public-private sector information sharing and engagement with vast amounts of critical infrastructure privately owned.

What are the views on Secretary Gates’ proposal considering the most recent cyber intrusions and civil-liberty minded views?

We saw recent success in the U.S.’s Defend Forward Cyber Strategy as it related to cyber election security against foreign adversaries in 2018 and 2020. What do we need to do going forward against broader foreign and malign influence campaigns by adversaries such as China, Russia, and Iran who treat information warfare using our social media networks as a toolbox on a 24/7/365 basis?

The Need to Flesh Out a Comprehensive Strategy

These are just a few areas within the technology arena that must be further fleshed out between policy makers and our national security apparatus. As we look at U.S. policies moving forward, a comprehensive strategy must be established to tackle the ever-growing technology threats abroad and at home.