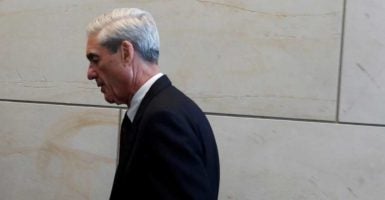 After 19 months, special counsel Robert Mueller’s investigation has charged a number of targets with almost every conceivable sin—except collusion with Russia to throw an election. Yet suspicion of collusion was the reason that Mueller was appointed in the first place.

President Donald Trump’s former consigliere, Michael Cohen, pleaded guilty to lying to Congress. But as part of his plea deal, Cohen also confessed to a superfluous charge of a campaign finance violation.

Instead, the accusation is that Cohen and Trump used Trump’s own money, but they did not report the payout as a “contribution” to his campaign. But Trump likely would have paid off Daniels anyway to protect his marriage, family, and reputation, regardless of whether he was running for office.

If you take media-sensationalized sex out of the equation, Trump, like any other American, has the right to pay anyone whatever he wishes to keep quiet about past embarrassing behavior, whether that be secretly gulping down too many Big Macs or cheating on the golf course.

Apparently, Cohen was leveraged by Mueller’s team to plead guilty to a crime that was likely not a crime. And in circular fashion, his confession was used as proof that the non-crime was actually a crime after all—and thus could serve as yet another way to find something on Trump.

It was not a crime for Flynn to talk with the Russian ambassador during the presidential transition. Yet the Russian diplomat was being surveilled by American intelligence, perhaps to reverse-target Flynn by getting something on him on tape.

The secret taping was green-lighted by a federal court in the midst of the hysteria created by the Christopher Steele dossier paid for in part by presidential candidate Hillary Clinton’s campaign. Then, Flynn’s name was illegally leaked to the press.

The FBI sent two investigators to interview Flynn, apparently on the prompt of acting Attorney General Sally Yates, a holdover from the Barack Obama administration. Yates, who served as the interim attorney general for 10 days, apparently came up with the ludicrous idea that Flynn might have violated the Logan Act. That law is an ossified 219-year-old statute about meeting foreign officials that has resulted in only two indictments over the years.

Next, former FBI Director James Comey counted on the Trump administration’s inexperience and broke normal protocol by sending investigators to interrogate Flynn directly without bothering with the usual administration intermediaries. Comey’s deputy director, Andrew McCabe, misled Flynn into assuming that the interview would be a friendly chat among “allies.” Flynn was told he would not need a lawyer.

Flynn complied, rightly assuming that it was not a crime for a transition administration official to talk with a foreign ambassador. He also likely was not fully aware that the FBI’s intent was to have him say something that would contradict the FBI’s secret transcripts of his talks with the Russian ambassador.

It gets worse. The FBI agents, who presumably had transcripts from Flynn’s talks with the Russian ambassador to compare to Flynn’s interview answers, expressed the belief that Flynn did not seem as if he was lying to them. Yet that conclusion was apparently overturned at some point by the FBI. To this day, the only real evidence that Flynn lied is his confession—and apparently the second thoughts of the FBI investigators, who reinterpreted their initial impressions in a much later official report.

Mueller seemingly wanted Flynn to testify about something that might prove that the Trump administration colluded with Russia. When that did not work, Flynn was later leveraged to “confess” to having lied to FBI investigators, who originally thought that he had not lied about a “crime” of talking about foreign policy with a Russian ambassador—an act that in itself was not illegal.

Once Flynn confessed that he lied, his legal costs diminished. His son was not indicted by Mueller. He was promised little or no jail time by cooperating with the investigation.

One of Flynn’s investigators was subsequently fired FBI agent Peter Strzok, who had exchanged texts with his paramour, fellow FBI official Lisa Page, in which they shared their disdain for Trump and their desire to keep him from ascending to the presidency.

Add it all up, and we have reached the point where the Mueller team may be constructing more crimes than it is finding.