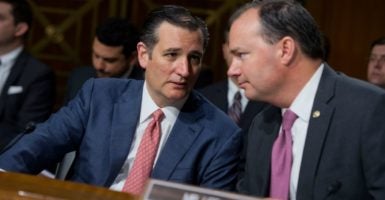 Sens. Ted Cruz, R-Texas, and Mike Lee, R-Utah, have called for Republicans to pass a bill with the same language as the 2015 Obamacare repeal bill. (Photo: Tom Williams/CQ Roll Call/Newscom)

Members of Congress should reject draft legislation to repeal and replace Obamacare that is currently being circulated in the House of Representatives.

At this point in the debate, they should focus their efforts instead on repealing Obamacare and transitioning out of its destructive effects.

Regrettably, the House proposal combines the repeal and replace efforts into one bill, jeopardizing the success of both.

The reality is that Obamacare cannot be repealed and replaced simultaneously. This is due to the political dynamic of the current debate and the special restrictions associated with the budget reconciliation process, which must be used to repeal Obamacare because it allows a bill to pass with 51, not 60, votes.

It will be virtually impossible to secure bipartisan support for any replace provisions if they are included in a bill that repeals Obamacare. It is unrealistic to expect that members of Congress who originally voted for Obamacare will now agree to repeal and replace it in a single bill.

That means congressional opponents of Obamacare will first need to find from among their own ranks the votes to repeal as much of it as they can through the budget reconciliation process. Only after they achieve repeal will there be any prospect of gaining bipartisan support for enacting alternative health reform measures.

The inability to get bipartisan support for repeal means that the budget reconciliation process must be used to pass any legislation that eliminates Obamacare. Reconciliation bills cannot be filibustered and are subject to restrictive rules that limit what can be in such a bill and thus eligible for expedited consideration in the Senate.

Reliance on reconciliation has two implications.

First, nearly all congressional opponents of Obamacare will have to support the reconciliation bill in order to pass it. The defection of just three senators would doom the measure. Obamacare opponents in the House face similar constraints and can afford to lose only a handful of votes without jeopardizing their ability to pass a repeal bill.

While President Barack Obama vetoed that legislation, the experience provided a blueprint for how Congress could repeal Obamacare once there was a president sitting in the Oval Office who would sign the legislation.

Opponents of Obamacare now control the House, Senate, and the White House for the first time since the law was enacted.

Yet some in the House are now unwilling to replicate the successful approach from last Congress. Instead of reusing the language from the successful 2015 bill, which passed both chambers, some House members now appear determined to include replace provisions in the repeal bill, despite the risks doing so poses for the larger effort to finally eliminate Obamacare.

For example, the draft proposal includes new refundable tax credits for individuals to purchase health insurance and significant changes to federal Medicaid funding. Reforming the tax treatment of health insurance and the financing of Medicaid are worthy goals. Tax credits and per capita caps are two ways to accomplish those goals. Whether or not they represent an improvement over the existing system, however, depends on the design of each particular policy.

But equalizing the tax treatment of health insurance and Medicaid reform are only two items on a broader list of reforms needed to truly transform the health care system while controlling costs.

For instance, current federal and state insurance market rules and health insurance provider regulations also need to be reformed in order to bring greater transparency, competition, and incentives for innovations in plan design and care delivery that improve results while reducing costs.

Shoehorning major pieces of health care reform into the restrictive reconciliation process, which can only include policies related to the budget, limits the ability of members to fully debate the merits of various policies designed to achieve these goals and to consider alternatives—including desirable policy changes that cannot fit within the confines of the reconciliation process. This is no way to reform a major part of the American economy that impacts people’s lives in a significant way.

If the secretive process by which the draft legislation was proposed is any indication, trying to pass significant replace provisions along with repeal risks replicating the process that was used to ram Obamacare through Congress in the first place. That process, just as much as the substance of Obamacare, has been responsible for poisoning the debate over health care ever since.

Recent reports suggest that some in the House have not learned this important lesson. But members in the House and Senate have already announced their opposition to the draft proposal being circulated, seemingly precluding its chances of becoming law.

Regardless, there isn’t time to find out. Continuing to hold repeal hostage for replace perpetuates the current market instability, increasing premiums, and coverage losses that have been the result of Obamacare.

Congress successfully voted to repeal Obamacare once. It is time to do it again. The only difference between now and then is that there is a president who is ready to sign the repeal bill into law.

For these reasons, Congress should scrap the draft legislation currently being circulated on Capitol Hill, take up and pass the 2015 bill, and begin the debate on how best to replace Obamacare with a series of patient-centered reforms unencumbered by the constraints of the reconciliation process.