Repealing Obamacare Is Just the Start: How to Fix American Health Care, Part 1 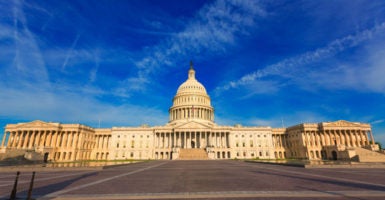 Despite promises that people could keep their plans and doctors, thousands of Americans were forced into more expensive insurance with higher deductibles and plans that didn’t include their doctors.

After spending billions in tax dollars, Obamacare managed to increase the number of people with health insurance by much less than predicted—with over 80 percent of even that increase the result of simply enrolling more people in Medicaid. So far, the net growth in private health insurance has been only about 3 million people—or less than 1 percent of the population.

In the meantime, Republicans won—first the House, then the Senate, and finally the presidency—by campaigning to repeal Obamacare.

Now, those who created the mess have the audacity to insist that Republicans not repeal Obamacare until they first put in place a new comprehensive, national design for America’s health care system. Unfortunately, some Republicans seem to be listening to them.

Yet those demands reveal a fundamental ignorance of how to achieve more choices, higher quality, and lower costs for any product or service.

Perhaps they should take a look at the history books.

By the end of the 1970s, Japan, once known for its cheap trinkets and poor product quality, was overtaking the U.S. automobile and manufacturing industries in terms of quality, efficiency, and costs. That was largely due to the business practices revolution led by Edward Deming, an American management consultant who went to Japan after World War II to rebuild its infrastructure.

Deming’s message was that companies could become successful by prioritizing quality above quotas, and bottom-up observations about efficiency from the factory floor in place of top-down edicts from the boardroom. Japanese corporations listened, improved, and grew. In contrast, manufacturers in the U.S.—even during the “golden age” of American assembly-line production—were not keen to listen to their customers’ complaints, nor to their workers’ ideas for improving quality and lowering costs.

It was not until the 1980s—when they were clearly losing out to Toyota and Honda—that companies like Ford finally reached out to Deming to learn the same lessons and instigate their own “quality revolution.”

This tale of two countries offers an important lesson for lawmakers in how to best reform the massive government programs that attempt to centrally manage services like health care and education for over 300 million Americans.

The private sector quality revolution happened when businesses pushed decision-making down to the shop floor and challenged workers to continuously improve how products were produced. Workers quickly began to make changes that would save seconds and pennies. Step by step, those seconds and pennies turned into minutes and dollars, and then into days and millions of dollars.

Once managers understood that quality improvement and costs reduction must be achieved incrementally, at the lowest levels of decision-making, the United States again became a beacon of manufacturing quality and efficiency.

Just like the American companies that lost market share when they refused to innovate, establishment politicians have lost elections because they ignored the outrage of Americans over the high costs and low quality of big government services.

It’s important to remember that the health care system was already over-regulated, inefficient, and needlessly expensive before Obamacare made all of those problems worse.

Consequently, repealing Obamacare is just the starting point, and clearing away the obstacles to innovative, bottom-up health reform will be a longer-term process, not a one-time event.

Tomorrow, in part two, we’ll explore what health care should look like in a world without Obamacare.