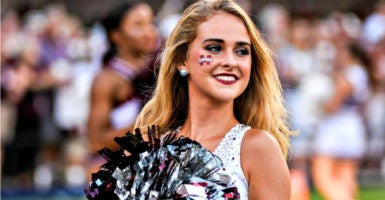 Entrepreneurial dynamism has lagged in America for the past eight years, according to The Heritage Foundation’s 2017 Index of Economic Freedom.

Yet someone in Mississippi’s Golden Triangle has been creating jobs for the American people. That person is Joe Max Higgins, an economic development official who has been going the extra mile for his fellow Mississippians.

Since the Great Recession, the rural area known as the Golden Triangle, which includes the towns of Columbus, Starkville, and West Point, has faced tremendous job loss. Unemployment in this eastern central part of the state reached nearly 20 percent.

However, in recent years, Higgins has made it his mission to restore the Golden Triangle to prosperity. The result? Some $6 billion worth of advanced industry relocating in the area.

How did Higgins—profiled in December by CBS News’ “60 Minutes”—establish this part of Mississippi as the new ideal destination for advanced manufacturers from around the world?

Two ways: by transforming the commercial environment to meet the needs of advanced manufacturing companies, and by introducing training classes at local universities to help shape future workers.

Higgins’ progress has been monumental and hasn’t stopped yet. He hopes to bring 10 more advanced manufacturing plants to Mississippi, and provide about 4,000 more jobs for the Golden Triangle.

His hard work hasn’t gone unnoticed. Gov. Phil Bryant, a friend of The Heritage Foundation and a strong conservative leader, says he believes that advanced manufacturing is “a major economic driver” for Mississippi.

Through efforts by individuals such as Higgins, the state has the power to push its economy forward through pure entrepreneurship.

This example of bottom-up economic development shows how an entrepreneur who is committed to the principles of the free market can power growth without the interference of government.

Entrepreneurial dynamism not only brings job growth, but delivers an increase in the quality of life, available services, and benefits for the society as a whole.

Policymakers in Washington could learn a lot from the example of entrepreneurial economic developers like Joe Max Higgins. Americans deserve better, and we can make American great again.