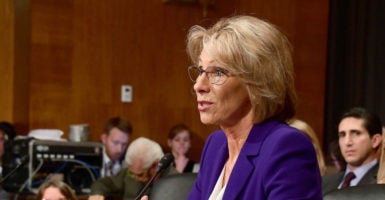 Betsy DeVos appears before the Senate Committee on Health, Education, Labor and Pensions during her confirmation hearing to become the secretary of education. (Photo: Ron Sachs/SIPA/Newscom) 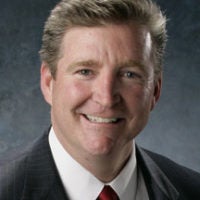 According to her opponents during Wednesday’s Senate confirmation hearing, Betsy DeVos, President Donald Trump’s choice for secretary of education, is guilty of wanting to privatize the public schools.

To be sure, the nominee’s critics are entitled to their own opinion, but not their own facts.

Here are the facts: DeVos believes that all children are entitled to the same educational opportunities regardless of income or ZIP code.

If you want a more accurate picture of DeVos, some journalists in her home state are more likely to paint it for you.

A Detroit News op-ed praised her record of compassionate interest in the individual welfare of children, calling her “a woman devoted to helping kids succeed regardless of their socio-economic background.”

And for this, certain members of the Senate Health, Education, Labor and Pensions Committee attempted to paint her as an enemy of public schools.

DeVos’ crime is that she, along with a majority of Americans, favors school choice. But solid research demonstrates why DeVos’ views are not only consistent with those of most parents, but also upheld by facts, evidence, and common sense.

It’s clear that school choice does not undermine the public school system economically or rob resources from it. In fact, it has proven to be more cost-effective.

School choice empowers economically underprivileged kids and encourages racial diversity. And it simply does a better job of equipping parents to put their children in the best school environment suited to their children’s unique needs—whether traditional public, charter, or private school.

Isn’t that what this discussion is all about?

It is immoral for us as a people to lock children into a life of poverty because we lock them into severely underperforming schools.

Nevertheless, we are likely to see a heated battle take place next week when it comes to DeVos’ confirmation vote.

Here’s something to keep in mind, though: More than half of the Senate Democrats on the education committee considering her nomination either attended private or parochial schools themselves, or have children or grandchildren who do.

High school seniors’ reading achievement scores have not improved for at least two decades and have even dropped five points compared to 1992. Likewise, seniors’ math performance has also stagnated for at least a decade and has dropped since 2013.

In discussing the state of public education in America, U.S. News & World Report offered a bleak and candid assessment. “In urban school districts across the country,” an education reporter wrote in 2015, “student performance is flat, poor, and minority students are experiencing staggering inequalities, and the picture is especially troubling for black students.”

And this is the status quo we’re trying to protect?

It’s time for a new way of thinking, and DeVos represents that. She has been a successful champion of school choice in Michigan and has helped bring similar opportunities to Florida, Louisiana, and other states.

She has what it takes to guide our nation’s education policy.

It’s time to stop playing politics with our nation’s children. Let’s work together for the reform that’s needed to do something big and bold to help our nation’s greatest treasure—the next generation.

Note: Dick and Betsy DeVos last donated to Focus on the Family more than 15 years ago.