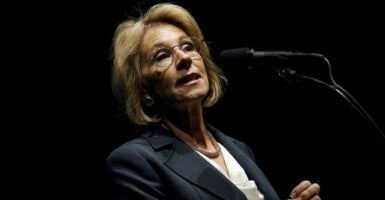 Six of the 10 Senate Democrats on the committee that will consider confirming Betsy DeVos—President-elect Donald Trump’s nominee for secretary of education—attended private or parochial schools, or have children and grandchildren attending, according to information obtained by The Daily Caller News Foundation Investigative Group.

That inconvenient fact complicates the prospects for the National Education Association and the American Federation of Teachers, which have vowed to defeat DeVos, a longtime school choice advocate from Michigan.

DeVos was the architect of Detroit’s school charter system and formerly led the Alliance for School Choice advocacy group. She headed the American Federation for Children—which backs school choice for poor and underprivileged families—when Trump nominated her.

Trump called school choice “the civil rights issue of our time,” especially for African-Americans, during the 2016 presidential campaign.

Millions of dollars have been contributed by the NEA and AFT to the 10 Democratic committee members to defeat Republican challengers, according to OpenSecrets.org.

DeVos is one of eight Trump Cabinet nominees who are “troublesome” and will be prime targets for defeat, Senate Minority Leader Chuck Schumer of New York announced Jan. 4.

NEA and AFT together have given more than $60,000 to Casey’s campaigns over the years.

Whitehouse has not stated outright how he will vote on the DeVos nomination, but he reportedly told a local town meeting that he “questioned whether DeVos had ever entered a public school, drawing laughs.”

Whitehouse said during a 2012 Senate debate that he sent his children to private school because he wanted “the best education that I can for them, and I felt that, in their circumstances, the places that I chose to send them were the best schools for them,” as The Daily Caller News Foundation previously reported.

Bennet attended St. Alban’s, one of Washington’s most elite private schools. His private school background and lack of public education experience didn’t sit well when he was tapped in 2005 as superintendent of Denver’s public schools. Bennet’s daughter was attending the Logan School for Creative Learning private academy when he was nominated. She was reportedly taken out of the school.

Minnesota Sen. Al Franken’s two children attend Dalton School, described by the liberal-leaning Daily Beast as “one of New York’s most exclusive and rigorous private schools and boasts an impressive roster of celebrity alumni, including Anderson Cooper and Claire Danes.” Dalton’s application asks parents to list any prestigious titles they hold, including, “Princess, Senate and Ambassador,” according to TheDaily Beast.

Hassan last year was censured by the Association of Boarding Schools for failing to disclose sexual misconduct charges against a faculty member who later received an education award. Hassan left the academy in 2015.

Sen. Maggie Hassan received $10,000 from the NEA in 2016, and the union also independently spent $1.5 million against her Republican opponent, Sen. Kelly Ayotte, according to the FEC. AFT also spent $4,400 to defeat Ayotte.

Educator Frederick Hess, author of “Cage-Busting Teacher” and “Education Unbound” called it “hypocritical” for elected officials who benefited from private schools to deny the same opportunity to others, especially those from economically less privileged neighborhoods.

“It’s just bizarre to see people who have exercised those school options suggesting that it’s somehow problematic or malicious to extend those options to all families,” said Hess, who is also executive editor of Education Next.

None of the six senators responded to The Daily Caller News Foundation’s request for comment.