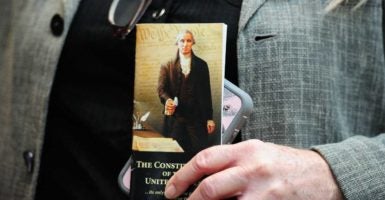 A student at Kellogg Community College was arrested due to his actions violating school policy. (Photo: Alex Milan Tracy/Sipa USA/Newscom)

Student members of the Young Americans for Liberty chapter at Kellogg Community College are suing their school after they were arrested for passing out copies of the U.S. Constitution.

The group says that on Sept. 20, 2016, KCC students Michelle Gregoire, Brandon Withers, and three others were in an open area in front of KCC’s Binda Performing Arts Center handing out pocket Constitutions and talking with students about YAL.

The students allege in their federal lawsuit that campus administrators and security approached them and told them they were violating the school’s Solicitation Policy because they were passing out the Constitution copies without prior approval. They were also informed they could not engage in such activity at that particular location.

The students allege that an administrator told them that “engaging [students] in conversation on their way to educational places” violated the Solicitation Policy because it was an “obstruction to their education” to ask them questions such as “Do you like freedom and liberty?”

This administrator also, according to the lawsuit, told the YAL members that students from “rural farm areas … might not feel like they have the choice to ignore the question.”

When Gregoire, Withers, and the others said they would not leave, KCC’s chief of public safety arrested them and charged them with trespassing.

Prior to this incident, Gregoire had attempted to establish a KCC chapter of YAL, but had run into difficulty. She was told she needed at least five members to establish the chapter, so she began approaching students and asking them if they would like to join.

The lawsuit alleges that KCC administrators—who were unnamed—told her she needed to reserve a table in the Student Center in order to speak with students about starting a chapter. Gregoire alleges that once she reserved the table, she was told she couldn’t approach or call out to students in order to recruit them.

As such, she was unable to speak with enough students to form the club. So, she reached out to the Leadership Institute, an organization that trains conservative grassroots activists, who agreed to help with her recruitment.

It was after this that Gregoire, Withers, and Isaac Edikaukas, vice president of YAL at nearby Michigan State University, began handing out the copies of the Constitution.

‘An Impediment to Their Education’

The students say in their lawsuit that no one was blocked from attending class or berated for not responding. They did not force anyone to take a Constitution or participate in a conversation.

But five minutes later, another administrator, Drew Hutchinson, told the students to stop what they were doing and insisted they were keeping students from their education. Hutchinson allegedly told the YAL members that asking passing students if they liked freedom and liberty was a “provocative” question.

In addition, he tried to suggest they reserve a table and continue their engagement in the Student Center, saying that “if somebody’s uncomfortable with what you guys are talking about, it’s not an impediment to their education,” according to the lawsuit.

When Gregoire and Withers refused to move, saying they were having success at that location, Hutchinson left and returned with KCC’s chief of public safety, Harold West.

West told them to leave the area and threatened to arrest Withers for trespassing. He left, but Gregoire, Edikaukas, and another supporter, Nathan Berning from the Leadership Institute, remained.

West arrested them for trespassing, and told Gregoire—a student at KCC—that she could not return to campus without his permission.

The three were booked in the Calhoun County Jail on trespassing charges, and spent more than seven hours locked up before posting bond. Ten days after their arrest, the county prosecutor dismissed the charges against them.

Withers says in the lawsuit that he has witnessed other students violating KCC’s free speech and solicitation policies without incident.

He said that a year prior to his encounter, he saw members of an LGBT student organization distributing literature in the Student Center while freely walking around and not confined to sitting quietly at a table.

Withers also alleges he has seen students asking for petition signatures around other areas of campus without prior approval to do so.

While KCC’s Solicitation Policy clearly states that activities such as the one YAL engaged in must receive prior approval from the school, the group alleges the policy is unconstitutional in part because it gives school administrators discretion over restricting student speech.

“Furthermore, KCC maintains an unwritten speech zone policy limiting student expression to one location on campus,” the lawsuit alleges. “If students express themselves on campus without a permit or in any other location, KCC deems them to be violating the Code of Conduct for Students, which exposes them to a variety of sanctions, including expulsion.”

The KCC chapter of YAL is being represented by Alliance Defending Freedom, a nonprofit that assists organizations and individuals fighting for right-leaning or religious causes. The students are demanding a jury trial and unspecified damages and attorney’s fees.

Neither KCC nor Hutchinson responded to a Watchdog request for information.