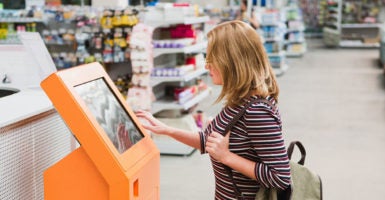 Government regulation is based on the pretense that human beings have sufficient knowledge to engineer the best economic outcome. (Photo: Scharfsinn86/Getty Images)

Here’s a question for you: In 1950, would it have been possible for anyone to know all of the goods and services that we would have at our disposal 50 years later?

For example, who would have thought that we’d have cellphones, Bluetooth technology, small powerful computers, LASIK, and airplanes with 525-passenger seating capacity? This list could be extended to include thousands of goods and services that could not have been thought of in 1950.

In the face of this gross human ignorance, who should be in control of precursor goods and services? Seeing as it’s impossible for anyone to predict the future, any kind of governmental regulation should be extremely light-handed, so as not to sabotage technological advancement.

Compounding our ignorance is the fact that much of what we think we know is not true. Scientometrics is the study of measuring and analyzing science, technology, and innovation. It holds that many of the “facts” you know have a half-life of about 50 years. Let’s look at a few examples.

You probably learned that Pluto is a planet. But since August 2006, Pluto has been considered a dwarf planet. It’s just another object in the Kuiper belt.

Because dinosaurs were seen as members of the class reptilia, they were thought to be coldblooded. But recent research suggests that dinosaurs were fast-metabolizing endotherms whose activities were unconstrained by temperature.

Years ago, experts argued that increased K-12 spending and lower pupil-teacher ratios would boost students’ academic performance. It turned out that some of the worst academic performance has been at schools spending the most money and having the smallest class sizes. Washington, D.C., spends more than $29,000 per student every year, and the teacher-student ratio is 1-to-13; however, its students are among the nation’s poorest-performing pupils.

If you graduated from medical school in 1950, about half of what you learned is either wrong or outdated. For an interesting story on all this, check out Reason magazine.

Ignorance can be devastating. Say that you recently purchased a house. Was it the best deal you could have gotten? Was there some other house within your budget that would have needed fewer extensive repairs 10 years later and had more likable neighbors and a better and safer environment for your children?

What about the person you married? Was there another person available to you who would have made for a more pleasing and compatible spouse?

Though these are important questions, the most intelligent answer you can give to all of them is: “I don’t know.” If you don’t know, who should be in charge of making those decisions? Would you delegate the responsibility to House Minority Leader Nancy Pelosi, Senate Majority Leader Chuck Schumer, President Donald Trump, HUD Secretary Ben Carson, or some other national or state official?

You might say, “Stop it, Williams! Congressmen and other public officials are not making such monumental decisions affecting my life.”

Try this. Suppose you are a 22-year-old healthy person. Rather than be forced to spend $3,000 a year for health insurance and have $7,000 deducted from your salary for Social Security, you’d prefer investing that money to buy equipment to start a landscaping business. Which would be the best use of the $10,000 you earned—purchasing health insurance and paying into Social Security or starting up a landscaping business?

More importantly, who would be better able to make that decision—you or members of the United States Congress?

The bottom line is that ignorance is omnipresent. The worst kind of ignorance is not knowing just how ignorant we are. That leads to the devastating pretense of knowledge that’s part and parcel of the vision of intellectual elites and politicians.