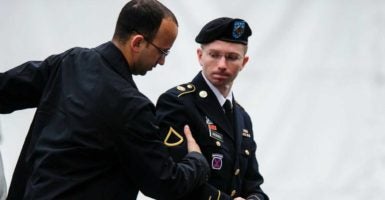 In 2013, Army Pfc. Bradley Manning, right, was sentenced to 35 years in prison for leaking over 700,000 confidential military documents to WikiLeaks.(Photo: Pete Marovich/EPA /Newscom)

In 2013, Manning was sentenced to 35 years in prison for leaking over 700,000 confidential military documents to WikiLeaks.

Republicans in Congress, however, are raising an outcry.

House Speaker Paul Ryan called the decision “outrageous” and said that Obama’s decision could set a pattern for future decisions.

“Chelsea Manning’s treachery put American lives at risk and exposed some of our nation’s most sensitive secrets,” Ryan said. “President Obama now leaves in place a dangerous precedent that those who compromise our national security won’t be held accountable for their crimes.”

Chelsea Manning's treachery put American lives at risk and exposed some of our nation's most sensitive secrets.

Sen. Thom Tillis, R-N.C., said in a statement Wednesday that Obama’s action of shortening Manning’s sentence is an “act of disrespect” to the military.

“Manning is a traitor who handed military and state secrets to WikiLeaks, putting our troops in danger,” Tillis said. “President Obama’s commutation of Manning’s sentence is the ultimate act of disrespect to our troops, our intelligence community, and our allies.”

“It has been my view that given she went to trial; that due process was carried out; that she took responsibility for her crime; that the sentence that she received was very disproportional—disproportionate relative to what other leakers had received; and that she had served a significant amount of time, that it made sense to commute and not pardon her sentence,” Obama said.

Sen. John McCain, R-Ariz., said that he is not surprised by Obama’s action on Manning.

“It is a sad, yet perhaps fitting commentary on President Obama’s failed national security policies that he would commute the sentence of an individual that endangered the lives of American troops, diplomats, and intelligence sources by leaking hundreds of thousands of sensitive government documents to WikiLeaks, a virulently anti-American organization that was a tool of Russia’s recent interference in our elections,” the Arizona Republican said in a statement Tuesday.

“It is shameful that President Obama is siding with lawbreakers and the ACLU against the men and women who work every day to defend our nation and safeguard U.S. government secrets,” Rubio said.