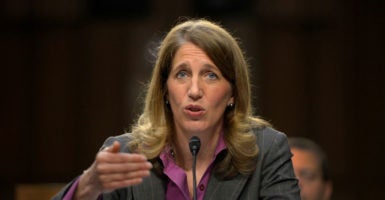 On Monday, Health and Human Services Secretary Sylvia Burwell gave a speech in support of Obamacare proclaiming the benefits of Obamacare and cautioning against repealing and replacing the law, as Congress has promised to do. Unsurprisingly, she left out some critical details from her list of Obamacare “benefits.”

On access, the uninsured rate has dropped below 9 percent—the lowest rate ever in our nation. And that’s partly due to the growth in the marketplaces … It’s also due to 31 states and D.C. that have expanded their Medicaid program.

But Burwell’s uninsured figure isn’t very precise because it is based on survey data rather than actual coverage data.

The Heritage Foundation looked at the actual net gain in insurance coverage from the first two years of Obamacare’s full implementation and found an increase of about 14 million people—not the 20 million that the administration has touted.

Of that 14 million, there was an increase of 11.8 million in Medicaid and 2.3 million through private coverage. Moreover, even after spending $1.8 trillion, Obamacare is still projected to leave 28 million people uninsured.

A second idea you may hear is that we can make coverage cheaper for everyone by lowering standards. Opponents of the law say that you should be able to buy a plan that covers only what you need. At first, it sounds kind of good.

The secretary went on to explain why she thinks this doesn’t work well. But what she didn’t mention is that Obamacare’s benefit mandates and insurance rules are the main culprits in driving up health care costs.

Heritage reviewed the various studies estimating how much these benefits add to premiums and estimated that if these provisions were repealed, “premiums for younger adults could be reduced by as much as 44 percent, and premiums for pre-retirement age adults could decrease by about 7 percent.”

Repeal of these mandates and rules would be particularly helpful for people buying health coverage that don’t get any subsidies.

Obamacare does provide government subsidies to people buying coverage in the exchanges, but there are about 10 million people that have to pay ever-increasing premiums and receive no subsidy to offset the cost.

To her credit, Burwell did recognize one of the law’s major shortfalls: The exchanges have very little insurer competition. Since the beginning, the exchanges have been less competitive for significant portions of the country, but this year is the worst yet.

Forthcoming research by Heritage shows that 70 percent of the nation’s counties have only one or two insurers offering coverage on their state exchanges in 2017. Indeed, there are five states that have a complete monopoly on their exchange across the entire state.

Lastly, regarding Obamacare replacement, Burwell repeated the myth that Republicans have presented no plan, saying: “We have not seen a plan that is out there that is actually a real plan with the details that can answer the most fundamental questions.”

The reality is that Republicans in Congress have presented numerous plans to replace Obamacare. A few of them include House Speaker Paul Ryan’s “A Better Way,” Georgia Rep. Tom Price’s Empowering Patients First Act, and the House Republican Study Committee’s American Health Care Reform Act of 2017, among others. The plans are there—some Obamacare supporters just don’t want to acknowledge them.

Congress is now set to begin the first step in the repeal and then replace process. The faster Congress can move to repeal Obamacare, the faster we can move America toward a better health care system.