The Right Way to Repeal Obamacare 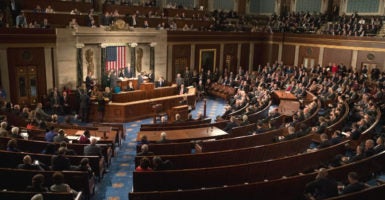 The current Obamacare repeal bill has earned overwhelming Republican backing in the past, having been approved by both the House and Senate in 2015. (Photo: Michael Reynolds /EPA/Newscom)

Last November, the American people voted for change in Washington. They elected Republican majorities to both chambers of Congress and elected a Republican president because, as a party, we pledged to fix the broken status quo of the past eight years.

Reforming our dysfunctional federal government and restoring sanity to our nation’s capital starts with relieving the American people from the burdens and excessive costs of our defective health care system and requiring Washington to once again live within its means.

These objectives are two sides of the same coin. Enacting real health care reform that will clean up the mess created by Obamacare is a crucial step toward paying down our nearly $20 trillion national debt and putting the federal government on a path of fiscal sustainability.

For this reason, some have called on Congress to use the first major legislative vehicle of the year—a budget resolution for fiscal year 2017—to repeal and replace Obamacare and to balance the federal budget.

I, for one, would love to see a bill that simultaneously repeals and replaces Obamacare while also balancing the budget, but this approach fails to account for the protracted and piecemeal nature of the legislative process.

The bigger and more complex a piece of legislation is, the harder it is to build a consensus around it. So, instead of trying to accomplish everything at once, we should proceed step by step, starting with the measure that we know already has majority support: repealing Obamacare.

Since 2010, most Republican members of Congress—myself included—were elected and re-elected because we promised to take any opportunity possible to end this disastrous law. In December 2015, House and Senate Republicans followed through on that promise and passed a bill, H.R. 3762, that repealed much of Obamacare.

President Barack Obama promptly vetoed the bill, but the exercise was not a fruitless effort because it established the minimum standards against which any future Obamacare repeal bills would be measured. H.R. 3762 zeroed out Obamacare’s individual and employer mandates, scrapped the taxes, revived health savings accounts, and rolled back the Medicaid expansion and subsidies.

Majorities in the House and Senate are on record voting for all of these items, and we owe it to the Americans who voted for us this past November to ensure that we do it again, this time with a president who will sign it into law.

That’s step one, and we can take it next week by passing the budget resolution for fiscal year 2017. Step two is to tackle our fiscal crisis, which will involve replacing Obamacare with a health care law that actually works.

For the past six years, Republicans in Congress have been developing free-market health care reform proposals that will lower costs, improve quality, and increase access for all Americans. But we have yet to build the consensus around a detailed plan that we can enact into law.

So, step two is going to take some time to complete, but we can start by passing a budget resolution for fiscal year 2018 later this year that sets our new, unified Republican federal government on a path to balance in 10 years without the use of budgetary gimmicks or tax increases.

The American people voted for change in 2016. But they know it can’t all come at once. The Republican majorities in Congress have a lot of work ahead of us, and the only way we can do it all is to proceed one step at a time.