Trump Presses UN to Reform. Here’s What Can Be Done to Curtail Its Power. 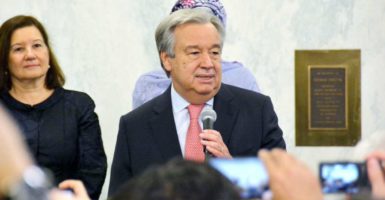 “The president-elect has been clear about the U.N.,” presidential transition team spokesman Sean Spicer told The Daily Signal Wednesday during a conference call with reporters. “We will demand reform and change to ensure that taxpayer dollars are spent as efficiently and effectively as possible.”

The U.N.’s most recent controversy involved a Security Council resolution that condemned Israel for its settlements in territory that Palestinians claim. President Barack Obama’s administration allowed the measure to pass.

Israeli Prime Minister Benjamin Netanyahu asserted there was “incontestable evidence the U.S. organized, advanced and brought this resolution to the Security Council.”

Secretary of State John Kerry denied the resolution was pushed by the U.S. government.

Conservative columnist Charles Krauthammer wrote that this could put every Israeli at risk since the resolution carries the stamp of international law.

An ordinary Israeli who lives or works in the Old City of Jerusalem becomes an international pariah, a potential outlaw—to say nothing of the soldiers of Israel’s citizen army. ‘Every pilot and every officer and every soldier,’ said a confidant of Palestinian leader Mahmoud Abbas, ‘we are waiting for him at The Hague’—i.e., the International Criminal Court.

The United States spends almost $3 billion directly on the U.N., covering 22 percent of the 193-member organization’s budget and 28.4 percent of its peacekeeping operations.

The U.N. estimated in 2014 revenue from the U.S. to the entire U.N. system—that includes various programs—totaling $10 billion, including the cost of such U.N. organizations as the International Atomic Energy Agency, the International Telecommunications Union, and the Universal Postal Union.

Sen. Lindsey Graham, R-S.C., the chairman of the subcommittee on foreign appropriations on the Senate Appropriations Committee, called for a bipartisan measure to “suspend or significantly reduce United States assistance to the United Nations.”

In late December, Trump tweeted: “The United Nations has such great potential but right now it is just a club for people to get together, talk, and have a good time. So sad!”

The United Nations has such great potential but right now it is just a club for people to get together, talk and have a good time. So sad!

“Chairman Royce looks forward to working with the Trump administration to demand transparency and accountability at the United Nations, an institution that has long been in desperate need of reform,” a committee spokesman told The Daily Signal in an emailed statement.

The House will vote Thursday on a resolution opposing the U.N. resolution regarding Israeli settlements.

Guterres, who took office on Jan. 1, acknowledged the international body has room for improvement in remarks to his staff Tuesday.

Without mentioning the United States directly, the secretary-general referenced concerns about inefficiencies in the organization.

“We need to make sure that we are able to reform the U.N. development system as member states have asked us, and we need to try to get rid of this straightjacket of bureaucracy that makes our lives so difficult in many of the things we do,” Guterres said.

“This requires a lot of effort from ourselves, but this also requires a lot of discussion and dialogue and mutual understanding with member states and we need to overcome many of the divides that still exist within the organization.”

Despite calls for the United States to exit the U.N., most foreign policy experts agree departure isn’t advisable.

“We need to stay in the U.N. to make it work for the United States,” Fred Fleitz, a senior vice president at the Center for Security Policy, told The Daily Signal. “The U.N. was established to promote Western values. Franklin Roosevelt did not set it up to be anti-American or promote dictators and terrorist regimes.”

Roosevelt coined the name of the organization in January 1942, shortly after America’s entry into World War II, issuing a Declaration of the United Nations, in which representatives of 26 countries pledged to fight the Axis powers. After war’s end in Europe, 50 countries first signed the new United Nations’ charter on June 26, 1945.

Fleitz, a former State Department and CIA official who wrote “Peacekeeping Fiascoes of the 1990s,” said the controversial resolution on Israel and the Palestinians spotlights some problems, but in this case, it’s the U.S. and allies that shoulder the blame

“I’m no big fan of the U.N., but this resolution was passed because of the U.S. and its allies,” Fleitz said. “This was not the Third World taking over the U.N. Trump could talk to Britain and France about not aiding and abetting Obama in his final days.”

The U.N. is comprised of disparate and specialized programs, many of which could be defunded, but the U.S. must remain in the body to influence actions of the U.N. Security Council, said Brett Schaefer, a fellow for international affairs with The Heritage Foundation.

“The U.S. should look at contributions to each program, and determine if it is meeting its mission,” Schaefer, editor of the book “ConUNdrum: The Limits of the United Nations and the Search for Alternatives,” told The Daily Signal.

Schaefer pointed to the Bill Clinton presidential administration that withdrew from the U.N. Industrial Development Organization, or UNIDO, after an evaluation showed that the program was not providing any value.

Schaefer said the U.S. has been funding the U.N. Peacekeeping Force in Cyprus, or UNFICYP, since the 1960s, and the U.N. Mission for the Referendum in Western Sahara, or MINURSO, since the 1990s, which are largely ineffective.

Schaefer said in the past, fiascoes like the Oil-for-Food scandal with Iraq, or major failures, such as the poor response to Rwanda genocide, prompted Congress to take a tough review of U.N. funding. The Israel vote is promoting the same notice, Schaefer said.

Schaefer is the author of a Heritage Foundation report with recommendations on what Trump can do regarding the U.N.

>>> 11 Priorities on International Organizations for the Trump Administration

One of Schaefer’s suggestions is to establish a dedicated unit with the State Department’s Office of Inspector General to audit the use of U.S. funds by international organizations. This group could also work with other U.N. oversight bodies.

Further, Schaefer’s report contends the U.S. should reconsider its support of the U.N. Human Rights Council, which includes Saudi Arabia, Venezuela, China, and Cuba, among other nondemocratic countries.

“The Trump administration should either announce its desire not to fill this position [of representative on the Human Rights Council] or appoint a representative willing to unapologetically challenge the [Human Rights Council] on its failings,” the report states. “In the latter case, if the council’s record does not improve, the U.S. should suspend funding and not seek re-election in 2019.”

Among other defunding options would be the U.N. Relief and Works Agency for Palestine Refugees in the Near East, or UNRWA, which, among other things, funds Palestinian school textbooks that promote violence, said Bill Roggio, a senior fellow for the Foundation for the Defense of Democracies and editor of the Long War Journal.

“The new administration will likely take a far tougher line against the U.N. perhaps in funding, as opposed to the Obama administration, which has seen the U.N. as a place to get business done,” Roggio told The Daily Signal.

“It’s an international body the U.S. will have to deal with. It’s likely the Trump administration will roll back and restrain it. It’s not a good idea to disengage, but we can put the U.N. in its its proper place.”