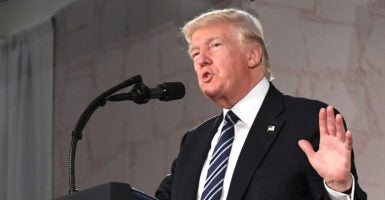 Both in the campaign season and in June as president, Donald Trump promised to withdraw the United States from the Paris Agreement. (Photo: Matty Stern/Zuma Press/Newscom)

Over the weekend, to the shock of many observers and loyal members of President Donald Trump’s base, The Wall Street Journal reported that the administration was seeking to avoid withdrawal from the Paris climate accord.

Top White House economic adviser Gary Cohn quickly sought to squelch these rumors, saying, “We are withdrawing, and we made that as clear as it can be. I don’t know how to say it any more clearly.”

Cohn’s assertion of U.S. withdrawal is encouraging, but if the Trump administration wants to end all internal and external speculation over Paris, it should withdraw from the entire United Nations Framework Convention on Climate Change.

Moreover, if the administration wants to achieve its goal of 3 percent economic growth and give the coal industry an opportunity to compete, withdrawal from Paris and the Framework Convention is critical.

When President Barack Obama joined the Paris accord in 2016, he avoided sending the agreement to the Senate for advice and consent as the Constitution requires for treaties. The agreement committed the U.S. to reducing greenhouse gas levels across the entire economy by 26-28 percent below 2005 levels by the year 2025, all without legislative consent.

Following through to meet these targets would require the Trump administration to enforce a number of costly Obama-era energy regulations. Trump has promised to end such regulations—indeed, they would make no noticeable impact on global temperatures.

While the Paris Agreement is nonbinding, remaining in the agreement would provide justification for a future administration to pile additional climate regulations on the energy industry—on top of those that the Obama administration promulgated. Thus, it is essential to withdraw.

Trump campaigned on “canceling” the global warming agreement and then followed through by announcing his intensions to withdraw from the Rose Garden in June. Foreign leaders immediately slammed the decision, calling the move “a major fault against humanity and against our planet.”

Yet these criticisms proved to be an act of hypocrisy. According to a recent article in Nature, “All major industrialized countries are failing to meet the pledges they made to cut greenhouse-gas emissions.”

And that’s just the industrialized world. To achieve any meaningful reduction in warming by reducing greenhouse gases, developing countries would have to remain de-developed or meet their growing energy needs without coal, oil, or natural gas.

Conventional fuels will be essential to meeting future energy needs in the developing world, where more than 1.2 billion people (17 percent of the global population) do not have access to reliable electricity. Pretending otherwise is simply ignoring reality.

The German environmental and human rights group Urgewald projects that 1,600 new coal-fired generation plants are either under construction or planned, resulting in 840,000 megawatts of new capacity.

It estimates that these new plants represent a 43 percent global expansion of coal spread across 62 different countries, 14 of which previously have not had any coal power at all.

For countries that do not have access to reliable power, the imminent threat of energy poverty is much more pressing than reducing carbon dioxide emissions. The Paris Agreement is not just poor economic and climate policy for the United States—it’s poor policy for the rest of the world, too.

To formally leave Paris, the U.S. must wait until November 2019 to submit a notice of withdrawal. The U.S. would then officially exit the agreement one year later.

Having such a large window of time leaves more opportunities for discussions of avoiding withdrawal, or potentially seeking a renegotiation of the accord. But renegotiating the agreement is a nonstarter, as there are no terms that could possibly assuage the economic concerns posed by the deal or achieve any meaningful climate benefit.

Rather than wait, there is a shorter, more effective solution than just withdrawing from Paris. Trump could end all speculation by officially withdrawing from the U.N. Framework Convention on Climate Change, which includes the Paris Agreement.

Withdrawal from the Framework Convention would enter into force one year after the secretary-general of the United Nations receives notification.

Such a withdrawal would send a clear signal throughout the U.S. government, to the business community, and to every foreign leader that the current international approach to climate change is costly, ineffective, and unworkable.