Conservative Groups Warn of Obama’s ‘Midnight Litigation’ Against US Business 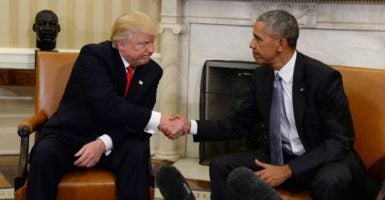 “Midnight litigation” should be of concern to the new Trump administration, according to a coalition of conservative and pro-business groups. (Photo: Pat Benic/UPI/Newscom)

Conservative and pro-business groups warn that the Obama administration may pursue legal action to enforce some of its thousands of new “job-crushing” regulations before President-elect Donald Trump is sworn into office.

“Because of this concern, Congress enacted the Congressional Review Act, which provides Congress procedural tools to disapprove expeditiously these last-ditch midnight regulations,” the letter says.

The Congressional Review Act could address regulations put in place by the Obama administration since June 3. However, the law can’t prevent so-called “midnight litigation” launched by the executive branch to enforce those regulations.

The Obama administration issued 3,852 new federal regulations during 2016, according to a new analysis by the Competitive Enterprise Institute, first reported Friday by the Washington Examiner.

The letter from conservative activists and business leaders says:

It has come to our attention that a number of departments and independent agencies are working furiously behind closed doors to bring significant, legally tenuous litigation against American business interests before Jan. 20, 2017. Doing so will saddle the Trump administration with having to litigate cases based on job-crushing liberal legal theories.

Inauguration Day, when Trump is sworn in as president, is Jan. 20.

The signatories represent 29 organizations, including Frontiers of Freedom, the Heartland Institute, and Liberty Counsel.

The letter warns Pence, a former congressman and governor of Indiana who is well-liked by conservatives, that the new administration should review any litigation to enforce the recent regulations.

“Your administration should not hesitate to withdraw immediately from that litigation,” says a letter to VP-elect @mike_pence.

Such last-minute litigation could hurt job growth, the letter says.

John R. Smith, the chairman of BIZPAC, the Business Political Action Committee of Palm Beach County, wrote in an op-ed for BizPac Review:

The lame-duck Obama administration has launched a mad scramble to throw up as many hurdles, and to plant as many last-minute landmines as possible against the new American president. In his final days of office, Barack Obama has initiated a major flurry of new executive orders, directives, and regulations, thousands of them, that he is piling into the federal books.

“Everything should be suspect,” George Landrith, president of Frontiers of Freedom, told The Daily Caller News Foundation, referring to the Obama administration’s final gush of regulations.