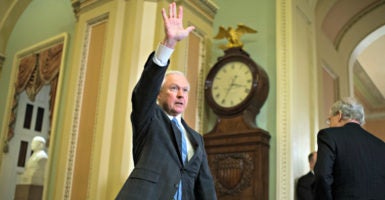 Sen. Jeff Sessions, R-Ala., spent a considerable amount of his time as U.S. attorney for the Southern District of Alabama pressing civil rights lawsuits. He also assisted local prosecutors in a case that helped wipe out the Ku Klux Klan in the state.

“All I’ve seen from Jeff Sessions is that he has followed law,” Horace Cooper of @Project21News says.

Yet accusations about the Alabama senator’s past on racial issues have become a focal point for those opposing his confirmation to be the next attorney general after President-elect Donald Trump takes office.

NAACP President Cornell Brooks, in a written statement, accused Sessions of having “disdain for our nation’s civil rights laws.”

Senator Sessions’ record suggests that he will carry on an old, ugly legacy in this country’s history when civil rights for African-Americans, women, and minorities were not regarded as core American values. While Lady Justice may be said to be blind, we need an attorney general with 20/20 vision in seeing racial injustice. Whether Senator Sessions, with decades of failing grades on the NAACP’s report card, possesses a racial vision and commitment to justice is in serious question.

A letter to Senate leaders from member organizations of the Leadership Conference, a coalition of civil rights groups, asserted: “Sessions has a 30-year record of racial insensitivity, bias against immigrants, disregard for the rule of law, and hostility to the protection of civil rights that makes him unfit to serve as the attorney general of the United States.”

But the same letter goes on to say:

Senator Sessions’ record does include some positive actions. For example, the Southern Poverty Law Center … acknowledged that he was helpful in the center’s successful effort to sue and bankrupt the Ku Klux Klan following its role in the 1981 lynching death of Michael Donald.

The Senate Judiciary Committee plans to hold a confirmation hearing for Sessions in the new year even before Trump, who picked him to run the Justice Department,  is sworn in as president Jan. 20.

The old accusations against Sessions, 70, played a key role in stopping his 1986 nomination to serve as U.S. district judge for the Southern District of Alabama.

Sessions is no racist and such attacks are a means of personalizing policy differences, said Horace Cooper, co-chairman of Project 21, a black conservative group, and adjunct fellow with the National Center for Public Policy Research.

“All I’ve seen from Jeff Sessions is that he has followed the law as the Supreme Court has defined it and has not attempted to make law,” Cooper told The Daily Signal. “It’s proper for a U.S. attorney general or a state attorney general to make decisions based on the law, whether the law is popular or not.”

Responding to a question from the Judiciary Committee asking him to describe the 10 most significant cases he litigated, Sessions wrote that five regarded racial matters, such as voting rights, desegregation, and prosecution of a Klan-motivated murder. He also explained his role in a fraud case against a civil rights activist, who was acquitted.

Paul A. Hancock, a former Civil Rights Division lawyer now in private practice in Miami, said in an interview with The Daily Signal that Sessions worked with the division and never against it. Still, Hancock delivered negative testimony to the Judiciary Committee about Sessions in 1986.

In decades past, federal prosecutors in Southern states resisted Justice’s Civil Rights Division, a Trump transition source said, adding that Sessions never claimed to have prepared the cases or taken the lead. Instead, he was the public face of the cases when DOJ lawyers returned to Washington.

Sessions said in response to the Judiciary Committee’s questionnaire that he understood a case out of Conecuh County “was the first voter suppression lawsuit ever instituted by the United States Department of Justice.”

He added: “I am honored to have been part of it.”

Sessions worked with Justice’s Civil Rights Division in a suit first brought in October 1983 against Conecuh County, after allegations the county hired only white poll workers.

Some of those poll workers made racist comments to turn away black voters, allowed white voters to cast ballots when their names were not on the rolls at a polling place, and put limits on how many blacks could vote, according to the suit.

In March 1984, Sessions and the voting section of the Civil Rights Division filed a pleading. Sessions was also part of discovery motions.

In June 1984, the case was resolved with a consent decree that ensured election workers would stop harassing and intimidating black voters. The decree encouraged political parties to recruit black poll workers.

In July 1982, Sessions co-filed an 80-page brief with the voting section of the Civil Rights Division that was a “finding of fact” stating that at-large districts used to elect county commissioners and school board members denied blacks full participation in the voting process.

The case dragged on until 1988, when a court ordered the county to have five districts for electing board members, with three containing majority black populations.

“Along with the [American Civil Liberties Union], my office continued to support extensive litigation,” Sessions wrote in reply to the questionnaire.

Prosecuting an Activist: US v. Turner

This is the case Sessions’ critics eagerly point to, largely because it involved bringing charges against Albert Turner, a former adviser to the Rev. Martin Luther King Jr., and mostly because Turner was acquitted.

The matter began in 1982, when Perry County District Attorney Roy Johnson urged a federal investigation after concluding the matter was too large for his office.

An Alabama grand jury, which was majority black and led by a black foreman, issued a report saying they were convinced “a fair election is being denied the citizens of Perry County, both black and white.”

The grand jury report asked the Justice Department for “vigorous prosecutions” and a federal monitor for elections.

However, the Civil Rights Division declined to investigate, and so did Sessions.

“We expected the local investigation would have caused all campaigners to re-evaluate their activities and conform to the law,” Sessions wrote in the Judiciary Committee questionnaire.

In 1984, when nearly every candidate for Perry County public office was black, several black candidates told Johnson, the district attorney, that they thought the election was being stolen.

Sessions said he didn’t want to be involved, but reluctantly asked an FBI special agent to observe the post office where the activity allegedly was occurring.

Sessions said the FBI saw Turner and his wife Evelyn drop off more than 300 ballots for mailing at the post office, and also saw Turner associate Spencer Hogue Jr. deposit another 170 ballots on the same night. These ballots made up the majority of the 729 absentee ballots cast in the county.

The FBI’s investigation determined that at least 75 of the 729 ballots had erasures or alterations, and 25 individuals said they hadn’t authorized changes that the Turners and Hogue allegedly made.

Sessions’ office charged the Turners and Hogue with 29 counts, including mail and election fraud. The defense argued that the practice was legal and voters gave permission to make changes. A jury acquitted all three on all charges.

Henry F. Hays was the son of Ku Klux Klan leader Bennie Jack Hays. In 1981, the younger Hays and an accomplice slit the throat of Michael Donald, a 19-year-old black man, and hanged his body from a tree.

Sessions said his office worked with state prosecutors to bring the case and to ensure a death sentence.

“Because the federal government did not have an effective death penalty, I insisted Hays be prosecuted by the local district attorney, Chris Galanos,” Sessions wrote.

After Hays’ conviction, in an unusual move, the state judge overrode the jury’s life sentence and sentenced Hays to death.

Later, while Sessions served as Alabama’s state attorney general, his office defended the verdict when it was appealed to the federal 11th Circuit Court of Appeals.

Donald’s family won a $7 million civil judgment against the Klan, which essentially bankrupted the organization in the state.

Sessions worked on the case with Assistant U.S. Attorney Thomas Figures. In 1986, Figures, who is black, told the Senate Judiciary Committee that Sessions had said the Ku Klux Klan was “OK until I found out they smoked pot.”

This allegation was part of what sunk the Sessions’ nomination for the judgeship.

Sessions, before asking that his 1986 nomination be withdrawn, said the comment was meant as a joke to ridicule the Klan. He added, “I detest the Klan.”

In a case that began in 1963, parents filed a class action lawsuit against the Mobile County Commission, asserting that it continued to unconstitutionally segregate public schools. After numerous court rulings, the parties entered a consent decree.

“More than a decade after the district court approved the consent decree on behalf of the United States, and with the support of the NAACP Legal Defense Fund, papers were filed with the court contesting the legally binding effect of the consent decree and alleging the school district had yet to fully integrate,” Sessions wrote.

The objections came after the county continued to allow several single-race schools.

As U.S. attorney, Sessions co-filed briefs in 1981, 1983, and 1985 with the Justice Department’s Civil Rights Division contending the school system was not fully integrated and challenging the validity of some of the consent decree.

The federal district court rejected part of the argument by Sessions and the agency, but still found the schools were not properly integrated.

In the case of the United States v. Marengo County Commission, a group of citizens in 1977 brought a class action lawsuit regarding the county’s at-large system of electing members to the county commission and board of education.

After Sessions became U.S. attorney in 1981, his office worked on setting up a redistricting plan. After the 11th Circuit Court of Appeals ruled in 1987 that the system diluted the impact of blacks’ votes, the county adopted a district plan.

In 1974, Alabama’s Hale County changed its district system to at-large races, which prompted federal litigation in 1976 that dragged over into Sessions’ time as U.S. attorney. Playing only a limited role, in October 1981, Sessions and the Civil Rights Division co-filed a response to the county’s district selection plan, and the court adopted the final alternative that December.

Another case, United States v. City of Demopolis, was similar in that Sessions worked with the Civil Rights Division to press a lawsuit against the city’s at-large system for electing members of the city council.

In March 1986, the case was settled after less than two months when the city agreed to enact racially fair, single-member districts.