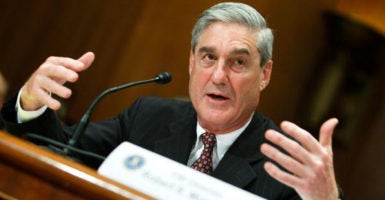 Special counsel Robert Mueller turned in his report on Russian interference in the 2016 presidential campaign. Pictured: While FBI director, Mueller testifies during a hearing before a congressional committee on June 4, 2009. (Photo: Alex Wong/Getty Images)

Special counsel Robert Mueller delivered a report Friday on his investigation of Russian meddling in the 2016 presidential election and allegations of collusion by the Trump campaign.

Attorney General William Barr, who took office Feb. 14, informed the chairmen and ranking members of the House and Senate Judiciary committees that he had received Mueller’s report.

“I am reviewing the report and anticipate that I may be in a position to advise you of the special counsel’s principal conclusions as soon as this weekend,” Barr wrote in a letter to the two Republicans and two Democrats.

Mueller will seek no more indictments as the 675-day probe has come to an end, Fox News and other news outlets reported.

During a confirmation hearing in January, Barr told the Senate Judiciary Committee that he would release as many details as he thought appropriate after reading the Mueller report.

“I am going to make as much information available as I can, consistent with the rules and regulations that are part of the special counsel regulations,” Barr told senators.

Barr, tapped by President Donald Trump after he fired Jeff Sessions as attorney general, also said he would follow legal procedures on the release.

“You would not like it if I made some pledge to the president of the United States that I was going to exercise my responsibilities in a particular way, and I’m not going to make a pledge to anyone on this committee.”

House Judiciary Chairman Jerry Nadler, D-N.Y., weighed in early on the news that Mueller had transmitted the report to Barr.

Mueller has secured indictments against two dozen Russian operatives on charges of interfering in the U.S. election campaign, including by stealing national Democrats’ emails.

The special counsel gained unrelated convictions on charges against Trump’s former campaign chairman, Paul Manafort, for financial crimes. He also drew guilty pleas from others in the Trump campaign for crimes not directly related to Russia.

There were a total of five guilty pleas and 37 indictments.

The House of Representatives, where Democrats regained the majority after the midterm elections, adopted a resolution March 14 that the Mueller report be made public. No one voted against it, though four Republicans voted present.

Deputy Attorney General Rod Rosenstein appointed Mueller as special counsel after Sessions recused himself from the probe because he had a role in the Trump campaign.

The investigation at one point appeared to expand beyond potential collusion into possible obstruction of justice.

Trump consistently has called the special counsel’s investigation a “witch hunt” and said Democrats had concocted a “hoax.” He made the words “no collusion” a catchphrase.

“It’s interesting that a man gets appointed by a deputy [Rosenstein]; he writes a report,” Trump said Wednesday of Mueller. “You know—never figured that one out.”

“I had the greatest electoral victory—one of them—in the history of our country,” the president added. “Tremendous success. Tens of millions of voters, and now somebody is going to write a report who never got a vote. So we’ll see what the report says. Let’s see if it’s fair.”

By law, the special counsel’s report is a confidential document similar to other federal criminal matters until the Justice Department determines it should be made public.