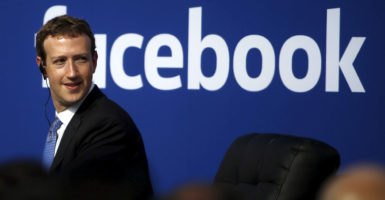 “We’ve focused our efforts on the worst of the worst, on the clear hoaxes spread by spammers for their own gain,” wrote Adam Mosseri, Facebook’s vice president of product management for news feed, in a blog post announcing the changes Thursday.

Here’s the skinny on Facebook’s four steps for cracking down on “fake news”:

Here’s a short video from Facebook explaining how it works:

2) Fact-checking organizations will be arbiters

Facebook is working with outside fact-checking organizations accredited by Poynter’s International Fact-Checking Network to help it determine what content is fake. They include ABC News, The Associated Press, Climate Feedback, FactCheck.org, PolitiFact, Snopes, and The Washington Post—all of which have been accused of liberal bias in the past.

“We’ll use the reports from our community, along with other signals, to send stories to these organizations,” Mosseri wrote. “If the fact-checking organizations identify a story as fake, it will get flagged as disputed and there will be a link to the corresponding article explaining why. Stories that have been disputed will also appear lower in news feed.”

By putting these stories lower in the news feed—the page you see when you log in—Facebook is reducing the likelihood that its users will see the content, and therefore, less likely to share it. But even in cases when they do see it, a “warning” will appear noting that the story has been disputed. These “flagged” stories can’t be promoted with an ad.

Facebook collects a lot of data, and it’ll now be paying closer attention to content that is consumed by its users but not shared.

“We’ve found that if reading an article makes people significantly less likely to share it, that may be a sign that a story has misled people in some way,” Mosseri wrote.

The result could mean a lower ranking in Facebook’s news feed.

4) Steps to cut off the cash flow

Facebook knows that purveyors of “fake news” are cashing in on its large base of users, so it will take steps to disrupt their financial incentives.

Mosseri explained: “On the buying side we’ve eliminated the ability to spoof domains, which will reduce the prevalence of sites that pretend to be real publications. On the publisher side, we are analyzing publisher sites to detect where policy enforcement actions might be necessary.”

Facebook defined these sites as “spammers” that are “masquerading as well-known news organizations, and posting hoaxes that get people to visit … their sites.” Those site visits then drive up revenue from advertisers.

Facebook, which earlier this year faced accusations of anti-conservative bias, promised Thursday to “keep working on this problem for as long as it takes to get it right.”

“Fake news,” however, could be more challenging than concerns over its Trending section, which didn’t have near the reach of Facebook’s news feed.

One of Facebook’s most popular users also happens to be the president-elect of the United States. On Wednesday, Facebook’s influence was on full display when Chief Operating Officer Sheryl Sandberg and board member Peter Thiel flanked Trump and Vice President-elect Mike Pence at a meeting in New York City.

This story was updated to include more information about Facebook’s changes.