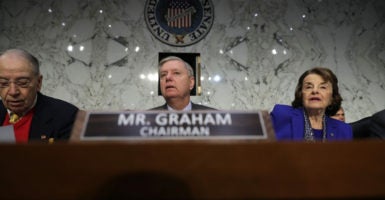 The Senate Judiciary Committee on Wednesday will hold its fourth judicial confirmation hearing of the 116th Congress, this one featuring two nominees to the U.S. Court of Appeals for the 9th Circuit. This hopefully signals that the new chairman, Sen. Lindsey Graham, R-S.C., will continue a robust pace for hearings on President Donald Trump’s judicial nominees.

As of March 11, 144 positions across the federal judiciary are vacant—35 percent higher than when Trump took office. We are in the longest period of triple-digit vacancies since the early 1990s.

Even worse, 60 percent of those vacancies have been designated “judicial emergencies” because they have been pending for an average of more than 800 days and have such a negative effect on judicial caseloads.

During the 115th Congress, Trump made 44 percent more nominations, and the Judiciary Committee held a hearing for 40 percent more, than during the same period under his five predecessors. Yet the Senate confirmed only 52 percent of Trump’s nominees. Today, 42 judicial nominees are still waiting on the full Senate’s executive calendar.

The nominees before the Judiciary Committee on Wednesday have provoked some controversy, but not because of their qualifications.

Kenneth Lee, currently a partner at Jenner & Block, has nearly 15 years of private practice under his belt and was an associate White House counsel during the George W. Bush administration. Last year, Lee made the Los Angeles Business Journal’s list of “Most Influential Minority Attorneys.”

Even the American Bar Association, which has been cited for bias against Republican nominees, unanimously gave Lee its highest “well qualified” rating.

The other nominee, Daniel Collins, earned his law degree from Stanford University in 1988, and went on to clerk on the 9th Circuit for Judge Dorothy Nelson and on the Supreme Court for Justice Antonin Scalia. He has been a federal prosecutor and associate deputy attorney general and has been in private practice for more than two decades.

If these nominees are controversial, it is only because the senators from California, Dianne Feinstein and Kamala Harris—both Democrats—want to pick a fight with the president whenever they can. They have refused to return their “blue slips,” the form used by Judiciary Committee chairmen to solicit the views of senators about judicial nominees who would serve in their state.

Today, at least, Democrats want the views of home-state senators to control the entire confirmation process. Opposition from even a single senator, they say, should stop the process cold and veto consideration of a nominee.

The truth is that no chairman is required to solicit the views of home-state senators at all, let alone put them in the confirmation driver’s seat.

No, the standard used for decades by chairmen of both parties is that a negative or withheld blue slip does not stop a nominee—especially to the U.S. Court of Appeals—unless the White House did not consult with the home-state senators. If that good-faith consultation occurred, as it did regarding Lee and Collins, then the confirmation process can move forward.

Left-wing groups are using familiar tactics to attack these nominees. For example, they use sentence fragments from articles Lee wrote more than 20 years ago to suggest certain personal views about race, sex, or sexual orientation.

Not only do these groups misrepresent what Lee wrote, but they apparently believe that judges should use their personal views to decide cases. Judges shouldn’t, and Lee won’t.

Harris, the junior senator from California, tweeted on Jan. 31 that she will “oppose every nominee to an appellate court” until there is “a fair process in place.” Of course, by “fair process,” she means one in which the president and the Senate majority comply with her demands for judicial appointments in California and the 9th Circuit.

This week, the Senate should also confirm the nominations of Paul Matey and Neomi Rao to the 3rd Circuit and D.C. Circuit, respectively. That will leave just 10 current vacancies on that court—44 percent below the average over the last three decades.

Partisan gimmicks and false claims should not slow the Judiciary Committee, and the full Senate should launch a full-court press to fill the ranks of the U.S. District Court.