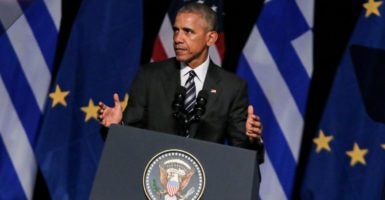 While President Obama didn’t himself start the multicultural, identity politics process—we have a long list to blame for that—he’s done more than his share to contribute to the present climate. (Photo: Aggelos Barai/ZUMA Press/Newscom)

While in Greece this week, President Barack Obama called the anxieties about national, cultural, and ethnic identities that impacted this election a “volatile mix.” He attributed this angst, though, to impersonal forces such as globalization, deindustrialization, and social media.

It wasn’t him. For eight years, the president said, he’s been working hard against approaches “that pit people against each other.”

The president is being uncharacteristically modest here. While he didn’t himself start the multicultural, identity politics process—we have a long list to blame for that—he’s done more than his share to contribute to the present climate.

As New York University professor Jonathan Haidt told Vox in an interview on Wednesday on the problems roiling the West, “the economic issues are much less than half the story … diversity, immigration, and multiculturalism are right at the heart of the problem in Western democracies.”

“Identity politics is like throwing sand in the gears … a world in which factions are based on race and ethnicity, rather than economic interests, that’s the worst possible world.”

And time and again, Obama stoked the two forces that militate against the nation state today: subnational groups and supranational threats. When speaking to ethnic groups, he hawked the victimhood that is the bonding agent of multiculturalism; when Congress stood in his way, he circumvented it by going to the United Nations.

First let’s look at what Obama said. Standing next to Prime Minister Alexis Tsipras, one of the leftist firebrands who have emerged in an anti-globalization wave in Europe, the president was asked whether he had underestimated anger and fear in America. As is his wont, Obama wasn’t brief.

“I think there are a whole range of factors involved,” the president averred. “I do think there is a common theme that we have seen in a lot of advanced economies and that we’ve seen around the world, although they manifest themselves in a number of ways.” He continued:

Globalization combined with technology, combined with social media and constant information, have disrupted people’s lives, sometimes in very concrete ways. A manufacturing plant closes and suddenly an entire town no longer has what was the primary source of employment. But also psychologically. People are less certain of their national identity, or their place in the world. It starts looking different and disorienting.

And there is no doubt that that has produced a populist moment on the left and right in many countries in Europe. When you see a Donald Trump and a Bernie Sanders, both two very unconventional candidates have considerable success, then obviously there’s something there that’s being tapped into, a suspicion of globalization. A desire to reign in its excesses, a suspicion of elites and governing institutions that people think may not be responsive to their immediate needs. That sometimes gets wrapped up in ethnic identity or religious identity or cultural identity. That can be a volatile mix. It’s important to recognize that those trends have always been there and it’s the job of leaders to address people’s real legitimate concerns and channel them in the most constructive ways possible. …

The more aggressively and effectively that we deal with those issues, the less that those fears may channel themselves into counterproductive approaches that pit people against each other. Frankly, that’s been my agenda for the last eight years.

We don’t all remember it this way. If a phrase sticks in our minds it is when during the 2010 elections Obama brazenly called on Hispanics to say, “we’re gonna punish our enemies and were gonna reward our friends who stand with us on issues that are important to us.”

There was also the time when he addressed the Congressional Hispanic Caucus and, after telling a 75-year-old story of how an L.A. cop had humiliated a Mexican-American (this while the country was reeling with anti-police agitation), he called on Hispanics to rally to the Democrats.

Obama has carried this self-serving message of “you’re a victim, vote for us” whether he was meeting with Americans of Asian background, African background, or of the Muslim faith.

Nobody denies that there are people who harbor racist or bigoted views in America—or any country. But you shouldn’t be allowed to pursue a divide and conquer, hyper-partisan strategy for eight years and then say, “Who, me?”

This has been his record with subnational groups. As for transnational threats to American sovereignty, the president has done an end-run around the elected U.S. Congress—a supposedly co-equal branch of government—by running to the United Nations on the Iran deal, nuclear testing, and a global climate deal.

Just three weeks ago, and acting entirely out of spite, he ordered our U.N. ambassador to abstain from a U.N. vote against the Cuban embargo. This is a law that was passed by the Congress, which is elected by the American people, while the U.N. includes the world’s worst dictatorships.

Americans are indeed less certain of their national identity and their place in the world, as the president said, but chalking it up to the internet and cheap jeans from China is a bit disingenuous.

Obama is rightly getting kudos everywhere for being such a class act during this transition period. But it would behoove him—and liberals in general, especially—to do some self-analysis of how exactly they have stoked popular disquiet about what’s happening to America.