What Obama Got Wrong in His Latest Defense of Obamacare 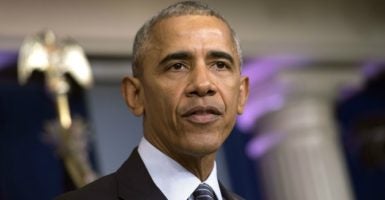 As debate over Obamacare’s repeal and replacement is getting started in Congress, it’s important to clarify some of the misleading claims made by President Obama. (Photo: Kevin Dietsch /UPI/Newscom)

On Monday, President Barack Obama remarked during a press conference on the likely demise of his health care law as President-elect Donald Trump and a Republican-controlled Congress have vowed to make full repeal of Obamacare a top priority next year.

As debate over Obamacare’s repeal and replacement is getting started in Congress, it’s important to clarify some of the misleading claims made by Obama.

First, he claimed that because of Obamacare, 20 million people now have health insurance that didn’t have it before. The administration has previously reported that 17.7 million people gained coverage from late 2013 to early 2016, with an additional 2.3 million young adults gaining coverage from 2010-2013.

However, the administration’s figures are estimates based on survey data rather than calculating the actual change in coverage in different markets.

The Heritage Foundation has measured the changes since Obamacare’s major coverage expansion provisions began in 2014 using actual enrollment data for Medicaid and private insurance and found that the coverage gains for 2014 and 2015 are just over 14 million people, with 11.8 million of those gaining coverage through the law’s Medicaid expansion.

Unfortunately, the Medicaid program has a poor track record in providing access to quality care, especially in comparison to private health insurance. Moreover, Obamacare’s Medicaid expansion cost about 50 percent more than it was projected to in 2015, adding to existing concerns about the program’s financial sustainability.

In addition, Obama made the oft-repeated claim that Obamacare has bent the health care cost curve downward. But in fact, the decline in health spending growth largely occurred prior to the implementation of Obamacare and has been mostly attributed to the Great Recession.

Obamacare’s coverage expansion provisions will cost more than $1.8 trillion over 2017-2026 and the provisions that are supposed to pay for that new spending have always been questionable.

Indeed, many of the law’s taxes have been delayed, changed, or waived for certain years—meaning that much more of Obamacare’s spending is unpaid for, adding to the burden of future generations.

Obama also said that “people who have health insurance are benefiting in all sorts of ways that they may not be aware of,” such as free mammograms and different insurance protections. While that may be true, there are also millions of American families that are very aware of the increase in cost caused by those new mandated benefits.

For example, in 2017, on the Obamacare exchanges in 39 states, the average premium increase for the benchmark plan will be 25 percent. For families with coverage through their employer, the Kaiser Family Foundation finds that average premiums have increased $4,372 from 2010 to 2016.

Trump and leaders in Congress have repeatedly assured Americans that there will be a smooth transition from Obamacare to the new reforms. Indeed, when Congress passed a repeal of major pieces of Obamacare in 2015 (vetoed by Obama), the bill included a two-year delay to ensure no one would abruptly lose coverage.

Since 2010, Obamacare has proved time and again that its flawed policies cannot work. Now, with drastically increased health care costs and decreased choices, Obamacare’s repeal and replacement is more important than ever.