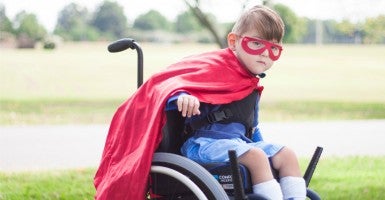 When Lindsay Franks received a letter from the Department of Health and Human Services’ health insurance marketplace in January, she was certain it was a scam.

“Important,” the letter read. “Respond within 60 days to keep your Marketplace health coverage.”

The message, dated Jan. 13, 2015, looked official, with the federal marketplace’s logo pasted in the upper left-hand corner. But the letter asked Lindsay to provide documentation for her husband, Nikolas, and 4-year-old son, Pierce, to verify their citizenship. This seemed off to the young mother and wife: Nikolas and Lindsay were born in the Carolinas, and Pierce was born on U.S. soil and was issued a Social Security number and birth certificate with the blessing of the U.S. government.

Plus, the address listed from the Department of Health and Human Services was London, Ky., not Washington, D.C., where the federal agency is located.

This only added to Lindsay’s skepticism, and she disregarded the letter.

Then, four months later, the Franks family, who live in Fort Mill, S.C., received a second message from the marketplace on April 10. This time, the Department of Health and Human Services notified Lindsay that Pierce had been removed from the family’s Blue Cross Blue Shield of South Carolina plan, and Pierce’s coverage would be terminated May 1.

The reason: a lack of sufficient documentation verifying his citizenship.

“It’s a logistical nightmare,” Lindsay told The Daily Signal, “and we’re stuck in the middle of it.”

Health Insurance Documents from the Franks Family by The Heritage Foundation

For another family, a potential lapse in coverage may not be a pressing concern. But for the Franks, it bears a significant burden.

He spent more than four months in the neonatal intensive care unit and was diagnosed with a brain bleed, hydrocephalus and cerebral palsy. To drain excess fluid from his brain, doctors inserted a ventriculoperitoneal shunt. The shunt can fail at any time—50 percent of the devices malfunction within the first year, and 80 percent within the first two years. Should that happen, emergency brain surgery is needed, and doctors have just 24 hours to operate before the child enters a coma. Pierce has had two shunts malfunction and has undergone seven surgeries total in his short life.

The Franks would never withhold surgery for their son because of a lack of coverage, but not having health insurance for Pierce adds a “whole other element of fear,” Lindsay said.

“It’s been very stressful because we know the urgency,” she said. “We can’t afford to just sit and not do anything.”

Once the government contacted Lindsay and told her Pierce’s coverage would be terminated, she sprung into action.

One day after receiving the letter from the Department of Health and Human Services, Lindsay sent Pierce’s birth certificate, copies of his Individualized Education Program from his school and medical records via certified mail to the federal marketplace.

Less than a week later, on April 17, the young mother checked with the marketplace to ensure they received the necessary documents. A representative couldn’t confirm that they received and processed the documents and advised Lindsay to “wait and see” what transpired.

But for Lindsay, “waiting and seeing” wasn’t an option because Pierce requires frequent medical care.

The guidance from the marketplace representative triggered a game of ping-pong between the marketplace and Blue Cross Blue Shield of South Carolina, the Franks’ provider, as Lindsay worked all angles to get Pierce back on the family’s plan.

“Don’t terminate people’s coverage because of this,” Lindsay said. “Don’t jump the gun. Your computer system shouldn’t terminate coverage until you verify this. Had I not been proactive, he would not have insurance, and we wouldn’t even know.”

Whenever the young mother had a spare moment—in between Pierce’s therapy sessions, in the car, at home—she was on the phone with the marketplace and Blue Cross Blue Shield of South Carolina. To ensure there was no lapse in coverage for Pierce, a marketplace representative suggested Lindsay re-submit an application for him through HealthCare.gov during the special enrollment period.

The Obama administration created a special enrollment period this year, which lasted from March 15 through April 30, and aimed to keep consumers who didn’t sign up for health insurance through the Affordable Care Act from having to pay a fine during the 2016 tax season.

On April 27, Lindsay called the marketplace back and spoke with employee Aaron Matthews, who resubmitted Pierce’s application. Matthews reassured the young mother there would be no lapse in coverage and said the new policy would go into effect on May 1—the day the marketplace planned to terminate Pierce’s coverage.

But when Lindsay called Blue Cross Blue Shield of South Carolina on April 29 to ensure Pierce’s coverage would kick in on May 1, they disagreed. In the insurance company’s system, the start date read June 1.

Pierce was scheduled to have testing done by a neurologist at Duke Medical Center in mid-May, which would then determine whether the 4-year-old would have surgery. If Pierce wasn’t covered, the family likely would have to cancel their appointment.

While speaking with Matthews, Lindsay finally learned why Pierce’s portion of the family’s application had been flagged for citizenship verification, an explanation the federal exchange previously couldn’t provide: The marketplace representative who filled out the application for the family over the phone had simply left the field blank.

“I’m just really exasperated,” Lindsay said. “It’s an error they made, and now I have to worry about it. I’m just done with the whole thing.”

>>> After Expanding Under Obamacare, This 123-Year-Old Insurance Company Is Closing Its Doors A representative from the Centers for Medicare and Medicaid Services, which oversees implementation of the Affordable Care Act and the exchanges, told The Daily Signal in an email that citizenship issues can occur when there are inconsistencies with data provided on an application and what the government has on file.

The official said customers receive multiple notifications from both the government and insurers asking for documentation and through various channels—mail, phone and email.

Lindsay received notice only through the mail and from the Department of Health and Human Services.

If a HealthCare.gov customer fails to provide relevant documents to prove citizenship, it’s CMS policy for coverage to be terminated to “ensure program integrity” and “protect taxpayer dollars,” the representative said.

Additionally, the CMS official stressed that the exchange must make sure that only those who are eligible receive insurance through the exchange.

At this time last year, CMS identified data-matching issues for close to 1 million individuals. In the following months, 851,000 submitted documentation proving their citizenship. By September 2014, 115,000 HealthCare.gov customers were at risk of losing their health insurance because of these problems.

Despite reassurances from the marketplace that Pierce would be added back to his family’s policy on May 1, Lindsay wasn’t overly confident it would happen.

So on that day, she headed to the pharmacy to pick up one of her son’s medications. Blue Cross Blue Shield of South Carolina denied the medication, which Pierce takes daily, because he was no longer covered under the family’s plan.

“The change to our policy was indeed made, despite my efforts in attempting to avoid this,” Lindsay said. “As you can imagine, I am pretty terrified of the domino effect that is about to ensue in regards to his prescriptions, appointments and medical bills.”

The family paid $200 out-of-pocket for the medicine.

Then, on Monday, relief came for the Franks.

More than three months after receiving the initial notice from the Department of Health and Human Services and following 50 hours of phone calls, Nikolas, Lindsay’s husband, received a phone call from Blue Cross Blue Shield of South Carolina.

Patti Embry-Tautenhan, spokeswoman for Blue Cross Blue Shield of South Carolina, told The Daily Signal the insurance company was in communication with the marketplace and has resolved the Franks’ issues.

However, she contended that “in any new process, there are things that need to be worked, and the health insurance marketplace is no exception.”

“What has been reinforced for us in these experiences is the importance of thorough communication with prospective members so that they fully understand their responsibility as it relates to their purchase,” Embry-Tautenhan said. “This is especially true in the health insurance marketplace where most people are coming with limited experience with this sometimes complicated purchase.”

For the Franks, they’re grateful they have resolved their discrepancies with the marketplace, but fear other families—including those who have children with disabilities—have had similar experiences.

“Of all the populations to be targeted, children with disabilities shouldn’t have their insurance terminated,” Lindsay said. “It’s some sort of huge glitch in the system, but the problem is there isn’t anyone who can help you and make a decision and fix it.”