With Trump Win, Ukraine Hopes to Score a US Presidential Visit 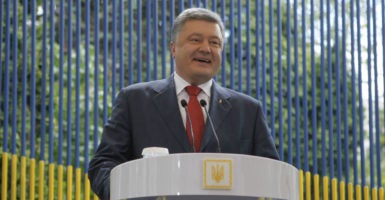 “This is a symbol of true democracy when nobody knew the results of the elections until the very last moment,” Poroshenko told U.S. Ambassador to Ukraine Marie Yovanovitch during a Wednesday meeting, according to a statement released by the Presidential Administration of Ukraine.

“And this is a feature of true democracy always professed and promoted by our reliable and strategic American partners and friends,” Poroshenko said.

Poroshenko’s statement reflects the importance of U.S. support to Ukraine as the war against a combined force of pro-Russian separatists and Russian regulars simmers in the east, and the fight against corruption gains steam inside Kyiv’s government halls.

“This is a symbol of true democracy when nobody knew the results of the elections until the very last moment.”
—@poroshenko

According to the statement, Poroshenko invited Trump to visit Ukraine. President Barack Obama never visited Ukraine during his presidency, and a visit by a President Trump early in his tenure would be a key diplomatic win for Poroshenko.

By winning the U.S. presidency, Trump “assumed responsibility for the global leadership of the United States in the democratic world,” Poroshenko said.

Ukraine considers U.S. support essential to its war effort—both in practical, operational terms, and as a diplomatic shot across the bow to Moscow.

About 300 U.S. Army soldiers are currently deployed to western Ukraine as part of a training mission for Ukraine’s military, and the U.S. Navy has had an important role in the rebuilding of Ukraine’s navy. U.S. military advisers are also in Ukraine in a variety of other noncombat missions.

While it remains a perennial topic of debate in Washington, the U.S. has not supplied Ukraine with lethal weapons, including anti-tank missiles, which would be useful in the artillery and tank skirmishes still ongoing in eastern Ukraine.

However, the U.S. has supplied Ukraine with other military equipment, including Humvees, meals ready to eat, and counter-battery radar systems.

Ukraine is a NATO partner country—not a full member of the alliance. Therefore, NATO has no treaty obligation to collectively defend Ukraine against an attack.

“Russia’s aggression on the eastern flank of NATO territory is an aggression not only against Ukraine, but the Western world,” Poroshenko wrote in a July op-ed for The Wall Street Journal on the eve of the NATO summit in Warsaw, Poland.

“Yet no NATO member state has actual battlefield experience engaging with the modern Russian army,” Poroshenko wrote. “Ukraine does.”

NATO took a hard line against Moscow after Russia’s 2014 annexation of Ukraine’s Crimean Peninsula and subsequent military operations in eastern Ukraine that year.

The U.S. is currently expanding its military footprint across Europe as part of a broader NATO military buildup on a scale unmatched since the Cold War.

Russia’s 2014 annexation of Crimea and combat operations in eastern Ukraine originally spurred NATO to pivot east. The move was meant to reassure the alliance’s eastern members, who consider Russia to be an existential threat, and to deter Russia from more military adventures.

Moscow paints NATO’s buildup as part of a long-term effort by the West to contain and diminish Russian regional influence.

Ukrainian officials have expressed concerns that U.S. and European solidarity in maintaining sanctions pressure on Moscow might waiver.

Tensions with Russia are high and getting hotter across the region. Aggressive military actions by the Kremlin, such as Russian warplane flybys of NATO warships and aircraft in Eastern Europe, have spurred a tit-for-tat series of exercises and military deployments between NATO and Russia across the region.

NATO’s ex-Soviet eastern members—including Poland, Estonia, Latvia, and Lithuania—have dramatically increased military spending to counter what they perceive to be the rising threat of military confrontation with Russia.

Fork in the Road

Trump’s election win comes at an inflection point for Ukraine—both for the war in the east, and the internal war against corruption and cronyism.

In 2014, Europe and the U.S. put in place punitive economic sanctions on Russia for its annexation of Crimea and military actions in eastern Ukraine.

The EU’s sanctions on Russia are set to expire at the end of the year. In December the bloc will vote on whether or not to extend the measures by another six months.

As the war drags on and Ukraine’s political reforms continue to waffle, there is concern in Kyiv that U.S. and European support for Ukraine could have an expiration date.

The Russian sanctions have had an economic cost to Western Europe, and are increasingly unpopular there. Ukrainian officials are also concerned that other geopolitical crises in which Russia has a hand, the war in Syria most notably, might siphon Western resolve from supporting Ukraine in exchange for more cooperation from Moscow.

Ukrainian troops are still embroiled in a more than 2.5-year-old conflict against a combined force of pro-Russian separatists and Russian regulars in the Donbas, Ukraine’s embattled southeastern territory on the border with Russia.

Implementation of a cease-fire, which was brokered in February 2015, has hit an impasse.

The current cease-fire, called Minsk II, calls on Kyiv to grant the two Russian-backed separatist republics in the east a greater deal of self-rule, and for local elections to be held in the contested territories.

Kyiv insists that political concessions can only happen after the shooting stops. To that end, Ukrainian officials have laid out a series of “red lines” for implementing the cease-fire, including full control of the border with Russia in the contested areas, that all Russian troops leave Ukraine, and international monitors are given full access to the war zone.

Russia, which has been a party to the cease-fire’s conception and implementation, says the political reforms should come first.

Ukrainian officials worry that by granting the breakaway territories a voice in government before the region is back under government control, Russia would have a proxy region inside Ukraine, which the Kremlin could use to block pro-democracy reforms in Ukraine’s parliament and derail efforts to foster closer ties with the EU and NATO.

The war in the east is not Ukraine’s only obstacle, some of the country’s wounds are self-inflicted.

According to a poll by the Democratic Initiatives Foundation, 94 percent of Ukrainians consider the country’s judiciary to be corrupt. Poroshenko’s approval ratings have also taken a hit, ranging from 6 to 20 percent.

Ninety-four percent of Ukrainians consider the country’s judiciary to be corrupt.

Still, some anti-corruption efforts have garnered praise from Ukraine’s Western allies. In October, for example, Ukrainian public officials were required by law to file personal property declarations in an online database.

The e-declarations were a positive step, but also a disheartening reminder of the lavish lifestyles enjoyed by much of Ukraine’s ruling class. The 470 members of parliament who filed their property online held $470 million in savings, much of it in cash.

In a country with an average annual salary of $3,178, the e-declarations offered stark evidence of the entrenched corruption and the stratification of Ukraine along class lines (with those in government often at the top), which continues to hamper the country’s transition to a functioning liberal democracy.

Former Georgian President Mikheil Saakashvili resigned on Monday from his post as governor of Ukraine’s Odesa Oblast. His resignation was a symbolic protest against widespread graft and corruption among Ukraine’s lawmakers.

“To be honest, for me, the last straw was the electronic declaration,” Saakashvili said, according to the Ukrainian news agency Ukrainska Pravda.

“Though some of the faces have changed, the concept of a ruling clan controlling the state of Ukraine’s affairs remains the same,” Yuri Polakiwsky, a Ukrainian writer, wrote in an editorial for the English-language Kyiv Post newspaper.

“Ukraine is not governed by any elected or politically appointed bodies which are accountable to the public, but rather Ukraine is controlled by the ‘clan of the selfish,’” Polakiwsky wrote.