Two Weeks to Make a Soldier: A Ukrainian National Guard Unit Trains to ‘Fight to the Death’ 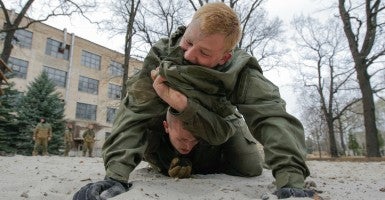 The Ukrainian National Guard Azov Regiment held its Spartan Test, a three-hour training meant to test the strength of soldiers, this past weekend. (Photo: Dmitriy Lipavskiy/EPA/Newscom)

KYIV, Ukraine—At its training camp on the outskirts of Kyiv this past weekend, the Ukrainian National Guard Azov Regiment held its Spartan Test—a grueling three-hour rite of passage meant to test the mental and physical strength of both new recruits and battle-hardened veterans.

The ordeal is the capstone to a two-week-long whirlwind military training program, after which many recruits travel to the front lines for the first time. The regiment, which began as a civilian volunteer battalion after the Maidan revolution last year, is stuck balancing the competing interests of building a military unit from scratch while sustaining continued combat operations.

With little time or resources available to mold civilians into soldiers, the Azov Regiment’s training program focuses on developing the most essential skills and traits necessary to keep soldiers alive.

The director of the program is Mikael Skillt, a 38-year-old Swedish sniper who has been fighting in Ukraine for 14 months. Skillt said that pushing a recruit to his mental and physical limit is an effective way to predict how he will react under the pressures of combat.

“We put them through stress tests to induce panic, and we see how they handle themselves,” Skillt said. “We have to see how they react to stress before we send them into combat.”

Along with a small cadre of Azov combat veterans chosen to be instructors, Skillt uses techniques such as burying soldiers alive for up to 20 minutes, pepper spray and water boarding to induce panic in the recruits.

Each class starts with about 50 trainees, and the attrition rate is about 10 percent. The most recent class began with 55 recruits, 50 of whom completed training this past weekend. One of the dropouts was a French paratrooper, Skillt said.

The Spartan Test is a series of physical challenges—including a 10-kilometer run, obstacle course and wrestling match—all of which recruits must complete in under three hours.

Forty soldiers, comprising both recruits and soldiers returned from the front (as well as four Russians) participated in Saturday’s Spartan Test. Only 23 finished.

The Spartan Test is a rite of passage for the Azov Regiment. Its completion is not a prerequisite for front-line service, but a source of pride within a unit that eschews traditional military chains of command and calls its organizational structure a “brotherhood.” Those who successfully complete the Spartan Test receive a pin and are eligible for specialized training programs like sniper school.

The Azov Regiment comprises foreign fighters from 19 different countries, including two Americans currently serving in the unit, according to Azov personnel. Because the rules of the most recent cease-fire ban the use of foreign fighters on both sides of the Ukraine conflict, most of Azov’s foreign soldiers have either returned home or left the battlefield to continue serving as trainers.

The Kyiv training camp is in an abandoned industrial park on the city’s outskirts. The owners of the property allow the Azov Regiment to use a section of the facility in exchange for protection against looters. The Azov camp is basic, with instructors living in residential trailers similar in size and shape to the Containerized Housing Units (CHUs) the U.S. military used on bases in Afghanistan and Iraq. And while the camp is within Kyiv’s city limits, the area has been designated a special “tactical area,” allowing for live-fire training under special circumstances.

The makeshift camp was a flurry of activity this past weekend. Girlfriends and other supporters came out to cheer on Spartan Test participants while local volunteers were busy constructing camp facilities. After the event was over, there was a cookout sponsored by civilian supporters of the regiment.

“It helps morale to see this kind of civilian support,” Skillt said.

Skillt is a former sniper in the Swedish military. While he has received media coverage in the past for his alleged far-right political ideology, he said images of Ukrainian protestors being gunned down by snipers in Kyiv during the 2014 Maidan revolution spurred him to fight in Ukraine.

“I don’t hate Russians, only Putin,” he said.

The Azov Regiment has also come under scrutiny due to accusations of promoting Nazi ideology, with many pointing to the similarity of the group’s symbol to the Nazi Wolfsangel. The regiment has downplayed the claims, calling them Russian propaganda. Skillt acknowledged that some of Azov’s members held far-right political beliefs, but said they were not representative of the group as a whole.

“All of them are willing to die for their country,” Skillt said. “Does their support mean any less if they are nationalistic?”

Skillt joined the Azov Regiment when the unit was still a civilian volunteer battalion with 120 soldiers—only two of whom had any military experience.

“We were a rough bunch,” he added. “At first we just had shotguns and other small arms.”

“In the beginning we only had pistols,” said Ivan Kharkiv, an Azov Regiment soldier in an earlier interview with The Daily Signal. “Now the National Guard gives us all we need.”

“We need weapons,” he added. “But instructors are more important.”

The unit was officially incorporated into the Ukrainian National Guard earlier this year, tightening government oversight on combat operations and training. Soldiers now receive a salary and government benefits for their service, and the government has also begun to equip the Azov Regiment with armored fighting vehicles and tanks.

The unit is still mostly autonomous, however. It retains control of its own training program and still independently plans and executes its combat operations in most circumstances. And unlike regular Ukrainian military units, which are heavily composed of draftees, Azov’s soldiers are volunteers.

Skillt said the volunteer mentality has made Azov more effective than most regular army units, despite its equipment and weapons shortfalls, and reliance on civilian donations for funding.

“I think this is how it was in World War II in America,” Skillt said. “Ordinary people who would never have been in the military under normal circumstances are ready to die for their country. These guys would do anything for their brothers; you will never see them running away from a fight.”

The unit currently has about 1,000 soldiers and is training 50 new personnel every two weeks to achieve its desired force strength of 1,200, which is the benchmark required by the Ukrainian government for additional armored equipment delivery.

The unit’s rapid growth has spurred its ad hoc training program, which Skillt was tapped to organize due to his prior military experience and performance on the battlefield.

Despite its manpower goals, Azov remains selective about its recruits. Some are turned away for psychological reasons, and with the help of the SBU (Ukraine’s equivalent of the FBI) background checks are completed to weed out potential Russian spies.

One of the key challenges of creating soldiers from scratch in two weeks is educating them with the discipline and knowledge to operate according to the laws of war, as well as within the terms of the Feb. 12 cease-fire. In the opening months of the war, when Azov was not under formal government oversight, the group’s conduct in battle was self-policed according to a “warrior code.”

“Now there is no surrender,” Skillt said. “If we are wounded we fight to the death.”