What the Trump Presidency Means for the Constitution 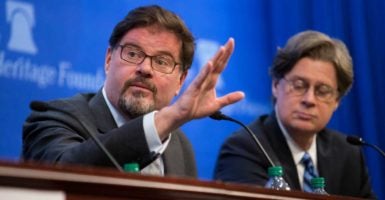 Following one of the biggest upsets in modern political history, The Heritage Foundation convened a panel of experts Thursday to examine what a Donald Trump presidency will mean for the Constitution and conservatism as a whole.

“I frankly think that what just happened in this election may have preserved our constitutional republic,” Heritage Foundation President Jim DeMint said in his opening remarks.

While the Supreme Court is one of the most important issues for voters, according to an exit poll conducted by ABC News, one panelist pointed out that the court is not the only defender of the Constitution.

“It infuriates me how we have come to the point of where we think the Supreme Court is the only guardian of the Constitution,” said Jonah Goldberg, a senior editor at National Review and fellow at the American Enterprise Institute.

Goldberg explained that politicians as well as citizens must also defend the Constitution.

Instead of relying on the Supreme Court, Goldberg believes that Americans should see themselves as the first line of defense when it comes to preserving constitutional principles.

“[W]e’ve gotten to this place where we just basically say, ‘Anything goes unless the Supreme Court, like a hockey goalie, stops it,’” Goldberg said. “And, that is something that the conservative movement … could do a much better job at in terms of creating that incentive structure for politicians.”

Trump’s opportunity to appoint Supreme Court justices who uphold the Constitution will be a top priority of the new administration.

Byron York, chief political correspondent at the Washington Examiner, is hopeful that conservatives will not have to worry about Trump’s choice of justices. He noted that Trump is sensitive to the reactions of his supporters.

“I think the roots of his approach to [the Supreme Court] go back to the early days of the Republican primary when he is trying to consolidate the support of conservatives,” York said. “And he’s got Ted Cruz, whose argued a bunch of cases before the Supreme Court, he’s got governors, he’s got a lot of people who have experience in government and law running against him, and Trump is extremely sensitive to the reactions of audiences.”

York believes that Trump’s perceptiveness of public opinion will be helpful in keeping him true to his word when it comes to filling Supreme Court seats.

York said that Trump picked up on the interest Republicans had in the primary about the future of the Supreme Court. The way he consolidated support, according to York, was to publicly release a list of judges that he said he would appoint.

In May, Trump announced that list, then in September, he released a more extensive list. During the final presidential debate in October, Trump said he would “be appointing pro-life judges.”

Confirming those judicial nominees might pose challenges, however. Even with a Republican president and a Republican-controlled Senate, Democrats could still mount a fight against Trump’s nominees using procedural tactics such as the filibuster.

>>> How Republicans Could Overcome Filibusters by Senate Democrats

Michael Mukasey, a former U.S. attorney general under President George W. Bush, is confident that this will not be the case.

“Although it is certainly not unprecedented for a nominee not to be voted on when there is a change in an administration, it is unusual to the point of being unprecedented for them to try to block any confirmation,” Mukasey said. “That is a political loser from their standpoint.”

While the Supreme Court is one of the most important issues facing the Trump administration, John Yoo, professor at the UC Berkeley School of Law and fellow at the American Enterprise Institute, said it’s not the only issue.

“It’s not just Supreme Court justices that are important,” Yoo said. “It is also who the attorney general is [and] how the Trump administration is going to interpret and enforce federal law.”

Yoo said that would “have much more of an immediate importance about the Constitution than who he appoints to the Supreme Court.”

“Once the honeymoon is over, conservatives need to be set up in a situation where [Trump] has to deal with us and get our approval on the important things,” Goldberg said.