Done Right, Trump’s Space Force Would Put the US on Top 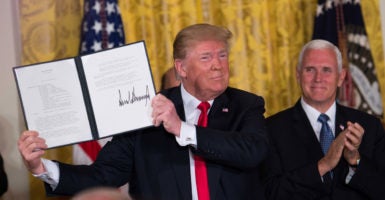 President Donald Trump directed the Pentagon on Monday to create a sixth branch of the U.S. military—the fifth within the Department of Defense—to be known as the Space Force.

That direction may have surprised some, but evidence suggests his announcement caught neither the secretary of defense nor the chairman of the Joint Chiefs of Staff unaware—and that Trump made the directive with the benefit of study.

The 2018 National Defense Authorization Act directed the deputy secretary of defense to conduct a review of the organizational and management structure of our nation’s space security components. The Department of Defense delivered an interim report to Congress on March 1.

Officials at the highest levels within the Pentagon reviewed the report before turning it over to Congress. And with the high military and political stakes riding on the report’s recommendations, you can bet Secretary of Defense James Mattis passed the findings on to his boss.

Two weeks after the report was delivered, the president suggested the idea of a Space Force in a speech at Marine Corps Air Station Miramar in California. While some will claim the timing of his words as happenstance, the rationale for such skepticism is thin at best.

The final report’s specific recommendations may vary around the edges from those of the interim report, but experience suggests the main recommendations are unlikely to change significantly between now and when officials deliver the final version to Congress in August.

Upon receiving the Defense Department’s final report, Congress likely will move to pass legislation establishing the Space Force—legislation the president will sign.

With the administration’s decision seemingly in hand, our efforts need to shift from opposing the initiative to ensuring that implementation delivers more than another layer of bureaucracy. The Space Force needs to be built in a way that re-establishes the United States as the dominant force in this critical domain—not with mere presence, but as the world’s greatest space fighting force. And we have our work cut out for us.

Today, 60 organizations govern space command and control for the United States. Eleven are charged with oversight and eight with acquisition. Six others define the requirements for space systems. No single entity or individual oversees any of the three efforts or holds the reins for the lot.

Just three of those 60 organizations belong to the Air Force, and, while it would be relatively easy to consolidate those three into another organization and call it a Space Force, the move would just add another bureaucratic thread to the malaise that currently exists.

To make the Space Force an effective addition to the Department of Defense, we need to go big.

The Space Force must absorb the vast majority of those 60 space organizations, and it should be given the authorities and funding required to develop the means to fight and win in the domain of space.

Congress has already started the process with the latest draft of the 2019 National Defense Authorization Act. The legislation directs the secretary of defense to develop a policy for warfighting in space that doesn’t just involve resiliency, the ability to defend against an attack or identify the nation that launched it—but to defeat any adversary in space at all levels of conflict.

When this administration follows through by consolidating the Department of Defense’s space assets into a single service and then appropriating the funds required to manifest these capabilities, the Space Force will put the United States back in the lead of all other nations in this critical domain.