US Right to Affirm Necessity of Missile Defense in South Korea 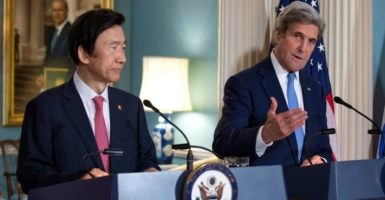 Secretary of State John Kerry, on the right, with South Korea's Minister of Foreign Affairs Yun Byung-se, responds to a question from the news media. (Photo: Shawn Thew/EPA/Newscom)

The biennial “2+2 meeting” (secretaries of defense and state with their South Korean counterparts) took place in the shadow of an escalating North Korean nuclear and missile threat. Kerry vowed that the U.S. would deploy the THAAD (Terminal High Altitude Area Defense) missile defense system “as soon as possible” to South Korea.

The U.S.-made THAAD is more capable than any missile defense system that South Korea has or will be capable of building for decades. Deploying it to South Korea will enhance allied deterrence and defense capabilities against North Korea’s threats to use nuclear weapons against South Korean targets.

North Korea’s Expanding Missile Threat. During Kim Jong Un’s four-year reign, Pyongyang has conducted more than twice as many missile tests as his father Kim Jong Il did in 18 years in office. In 2016, North Korea has engaged in a rapid-fire series of nuclear and missiles tests, significantly expanding and augmenting the nuclear threat to the United States, South Korea, and Japan.

Based on these successes, as well as regime disclosures of missile program information, the South Korean government and outside experts now believe that North Korea’s SLBM and Musudan could be deployed within one year, rather than three to four years, as previously assessed.

In 2016, North Korea has engaged in a rapid-fire series of nuclear and missiles tests, significantly expanding and augmenting the nuclear threat to the United States, South Korea, and Japan.

Advancements in North Korea’s SLBM and mobile IRBM are particularly worrisome because both are harder to detect than fixed systems and thus more difficult to detect and defend against. South Korea currently does not have any effective defense against an SLBM and the Musudan would be able to attack Guam, a key U.S. node for Pacific contingencies.

Experts continue to debate whether North Korea has the ability to target the continental United States with a nuclear intercontinental ballistic missile. Several U.S. four-star commanders believe Pyongyang likely has such a capability, while other experts believe it is still several years away.

In any case, we know the path that North Korea is on and it is only a matter of time until they can put the U.S. at risk, as they already put our allies South Korea and Japan at nuclear risk.

US Extended Deterrence Critical to Stability. North Korea is but one of the countries mounting ballistic missile threats to the United States and its allies. While Washington has taken steps to deploy missile defense systems, these efforts have lagged behind what is necessary.

In northeast Asia, the increasing North Korean threat, coupled with growing concerns over U.S. resolve to defend its allies, have led South Korea and Japan to propose accelerating their own missile defense programs. Coupled with these necessary defense upgrades, there is growing South Korean discussion of developing its own nuclear weapons program and leaning more heavily on a unilateral preemptive attack strategy that could be destabilizing.

Beyond deploying THAAD, the U.S. must augment efforts to reassure our allies of American commitment and resolve to defend them, include an unequivocal extended deterrence guarantee.

During the past year, South Koreans increasingly questioned whether the U.S. would “trade Los Angeles for Seoul,” despite America’s decades-long commitment to NATO against an even greater Soviet and Russian nuclear threat.