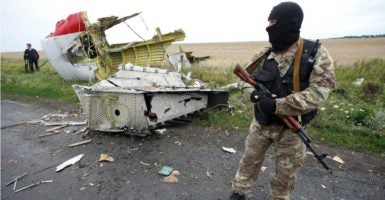 In interim findings, a team of investigators says Malaysia Airlines Flight 17 was shot down by a surface-to-air missile fired from an area controlled by Russian-backed fighters in eastern Ukraine.

The team, comprised of investigators from Australia, Belgium, Malaysia, the Netherlands, and Ukraine, is conducting a criminal investigation into the downing of MH17 on July 17, 2014, which killed all 298 people on board.

The report confirmed what has been known for some time. The day after the downing of the airliner, President Barack Obama said evidence indicated “the plane was shot down by a surface-to-air missile that was launched from an area that is controlled by Russian-backed separatists inside of Ukraine.”

Obama also said Russia had supplied weapons, including anti-aircraft weapons, to Russian-backed forces in Ukraine. In October 2015, a report from the Dutch Safety Board concluded the plane was brought down by a Russian-made surface-to-air missile.

The tragic loss of nearly 300 innocent lives over the skies of Ukraine over two years ago is emblematic of the cavalier and naked aggression Russia has undertaken against Ukraine.

Russia invaded Ukraine in February 2014, annexed Crimea a few weeks later, and continues to fight a war in the Donbas region against Ukrainian government forces. Russia’s invasion of Ukraine has cost more than 9,600 lives and resulted in over 22,000 injuries since April 2014.

The shooting down of the civilian airliner in 2014 threatened to turn worldwide public opinion further against Russia. As a result, Russian propaganda conjured up a flurry of alternative absurd conspiracy theories mostly blaming Ukraine for the shoot-down.

Russia’s disinformation campaign and trolls have targeted investigators looking into MH17, and Russia is also believed to be behind a 2015 cyberattack of the Dutch Safety Board.

The interim report findings should serve as a reminder to Americans that Russian President Vladimir Putin’s Russia is not a friend that can be bargained with, rather it is a brutal regime that has brought war back to Europe, a war which continues to this day and has cost thousands of innocent lives.

Furthermore, Russia’s reaction to the shooting down of MH17 and subsequent investigations into the tragedy are clear examples of how Russia uses propaganda, cyberattacks, and obfuscation to advance its narrative of events, even when irrefutable evidence exists to prove Russian disinformation incorrect.

Whoever takes over the White House in 2017 will face an aggressive, revanchist Russia that is a threat to the United States and our allies. No amount of wishful thinking can obscure this fact.

The U.S. must approach relations with Russia from a position of strength, reassure our allies, and implement a comprehensive strategy for dealing with Russia as it currently is. The U.S. should also continue to support Ukraine as it defends itself and continues to institute necessary political and economic reforms.

MH17 was a tragic incident brought about by Russia. American leaders must not view Putin and his regime through rose-colored glasses.

Let us hope that these latest findings help clarify any misunderstandings about the nature of the Russian regime and the deadly consequences of its actions.