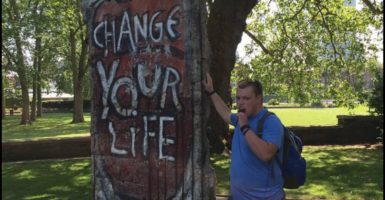 A Virginia Tech student, currently on a hunger strike advocating for the allowance of concealed weapons on campus, wants the right of self-defense abided by on his college campus.

“I am advocating for Virginia concealed gun permit holders to be able to carry concealed on campus and in buildings and in the classrooms,” Ryan James Martin, a fifth-year senior studying English and biological sciences at the Virginia university, told The Daily Signal in a phone conversation. “The hunger strike aspect of it was really designed to call attention to the issue.”

Martin, 22, started his hunger strike Sept. 25 at 11:59 p.m. and plans to carry the strike through Friday, Sept. 30, at the conclusion of University President Timothy Sands’ first State of the University Address set to start at 3 p.m. Eastern time.

The Virginia Tech campus is a gun-free zone.

Martin, a concealed carry permit holder in the state of Virginia, said that on his campus no one is allowed to carry Nerf guns or even pepper spray.

“The only legal weapon we’re really allowed to have is a less than four-inch pocket knife and our fists,” he said.

“Just because I have a gun on me does not make me an evil assailant,” Martin said.

“Just because I have a gun on me does not make me an evil assailant.” —Ryan James Martin, a Virginia Tech student

Martin said he has had his concealed carry permit for a little over a year and said he has passed state and federal background checks multiple times and is also a firearms instructor.

“I take [students] to our local firearm range free of charge and teach them how to shoot safely and effectively,” Martin said.

Martin said that in January he requested a meeting with Sands, the university president, and the university’s Board of Visitors to discuss concealed carry on campus. The meeting was never granted, he said.

“Our campus is not immune to the ever-increasing acts of violence and terror that happen every day,” Martin wrote in the email to The Daily Signal. “We should know best—it has been 3,447 days since we inherited the title of deadliest college campus in the nation, yet students are still forbidden from even carrying pepper spray as per university regulation.” His email added:

Further, I will be on the steps of Burruss Hall every morning, and every other chance I am able next week, to read aloud the Constitution and Bill of Rights which seem to be ignored on my campus.

“Virginia Tech respects any student’s right to civil protest, provided that person abides by our Principles of Community and incurs no harm to self or others,” Mark Owczarski, assistant vice president for university relations at Virginia Tech, wrote in an email to The Daily Signal.

“All matters related to the university policy on weapons would be directed to our vice president of administration, Dr. Sherwood Wilson,” Owczarski said in an email regarding Martin’s request to meet with Sands. “The student did in fact meet with Dr. Wilson. His claim a meeting was never granted is disingenuous.”

In April 2007, 32 students and staff were killed by a gunman in the Virginia Tech massacre in Blacksburg, Virginia.

“What we saw on April 16, 2007, almost 10 years ago, is that 32 students and faculty members were killed, many others shot while they waited for a little over 10 minutes for law enforcement to arrive and the threat was neutralized,” Martin said.

“I truly believe that if one of those individuals had legally possessed a concealed firearm, we’d have less than 32 memorial stones on the Drillfield today,” he said, adding:

I’ve been called many names for claiming that, but in all honestly we’ll never know because they weren’t allowed self-defense that day and we saw what happened. It’s a tough issue. It is sensitive, but we need to talk about it. We need to find some solutions to the problems we face as a campus of 30,000 students.

In Virginia, along with 22 other states, a college or university makes the decision whether to ban or allow concealed carry on campus, according to the National Conference of State Legislatures.

To obtain a concealed carry handgun permit in Virginia, a person must be 21 years of age or older or a member of the military.

Employees, students, volunteers, and visitors at Virginia Tech “reported or discovered to possess a firearm or weapon on university property will be asked to remove it immediately,” the university’s policy on weapons states. “Failure to comply may result in a student conduct referral and/or arrest, or an employee disciplinary action and/or arrest.”

Exemptions from the policy include certified and sworn police officers or when participating in programs sponsored by the on-campus police department such as the police academy.

This week, Martin said he has limited his hunger strike diet to consist of liquid intake and regular medicine and multivitamins.

Over 34 hours into his strike, “at this point, I’m surprisingly not even hungry,” Martin told The Daily Signal Tuesday morning.

Martin said he possibly will strike longer than Friday if Sands does not contact him, but already considers the hunger strike a success because he’s “got the conversation on campus going.”

This article has been updated to add Virginia Tech’s response to Martin’s assertion that his request to meet with University President Timothy Sands and the Board of Visitors was denied.