The FDA’s Rule on E-Cigarettes Will Hurt Public Health 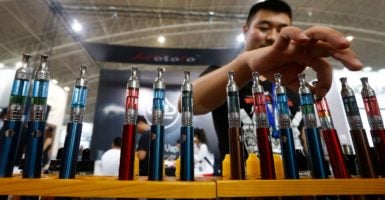 While more research on vaping may be warranted, there’s significant evidence that e-cigarettes are helping many people. (Photo: Rolex Dela Pena /EPA/Newscom)

Many people have been impacted by the harm that can be caused by cigarette smoking, including the loss of family members.

The market has found a solution to this major public health problem. The federal government is about to crush that solution.

Recent technological innovations, such as vaping products (e.g. e-cigarettes), have provided an alternative for those seeking to stop smoking cigarettes.

There’s a problem though.

The Food and Drug Administration has issued a rule that will, in effect, prohibit the sale of many of these products beginning in August 2018.

The FDA’s new rule would require companies—if they can—to show that their e-cigarettes are “substantially equivalent” to a tobacco product that was on the market as of Feb. 15, 2007.

E-cigarettes though, in general, didn’t exist on this 2007 date. Therefore, a company introducing a new e-cigarette product couldn’t use this substantial equivalent standard because there was nothing that was substantially equivalent.

Instead, these companies would have to go through the costly and burdensome pre-market tobacco application process. The FDA itself acknowledges this burdensome process could cost as much as $466,000 per product. There are other estimates that getting approval could cost over $1 million.

Also, vaping product manufacturers will have to complete many applications because even minor product variations such as different flavors or bottle sizes will constitute a “new tobacco product.”

For smaller companies, and maybe even larger companies, the process may be infeasible, making it unlikely their products will be available after August 2018. Making matters worse, this pre-market tobacco application process would apply to existing e-cigarette and vaping products on the market, not just future products

The FDA admits that it expects most of these promising public health solutions will have to go through this burdensome process: “The FDA expects that most ENDS [Electronic Nicotine Delivery Systems] products that companies submit for market authorization will utilize the PMTA [Pre-Market Tobacco Application process] pathway.”

Regardless of whether the FDA is misapplying the law or whether there’s just a technical flaw in the Tobacco Control Act passed in 2009 that gave the FDA authority to regulate tobacco products, Congress needs to take immediate action to make it unambiguously clear that these potentially life-saving innovations won’t be subject to regulatory obstacles that may keep them off the market.

Ideally, Congress would make it clear that vaping products aren’t “tobacco products” under the 2009 Tobacco Control Act (pending lawsuits are addressing this issue and many other issues), and thus wouldn’t be subject to regulation by the FDA.

In the interim though, this “grandfather date” issue needs to be addressed immediately so that vaping products won’t have to go through this overly burdensome regulatory process.

The FDA Deeming Authority Clarification Act of 2015, for example, would achieve this objective by clarifying that the “grandfather date” would be the effective date of the FDA’s regulations, not the current and arbitrary grandfather date of Feb. 15, 2007.

To address any possible concerns, legislation addressing this grandfather date could clarify that it has no impact on whether the FDA has authority to regulate these products or other aspects of the FDA’s rule, such as regulations connected to the sale of vaping products to minors.

If this problem isn’t addressed, how many lives will be harmed because many people won’t have access to vaping products? This isn’t just a public health issue, but a moral issue. The incredible benefits of these products greatly outweigh any questionable harm.

Using a precautionary principle approach (i.e. prove something isn’t harmful before allowing it) is both dangerous and immoral when millions of people have the chance to move away from the known and severe harms of smoking cigarettes. People now using e-cigarettes may even move back to smoking if this FDA’s rule isn’t addressed.

The vaping choices that will be offered will be greatly reduced. The options that help most people now and best meet their specific needs may not be available after August 2018, nor will the number of innovations be nearly as great. Congress just needs to fix an unintended consequence of the Tobacco Control Act. One simple technical correction could play a role in helping to save many lives.