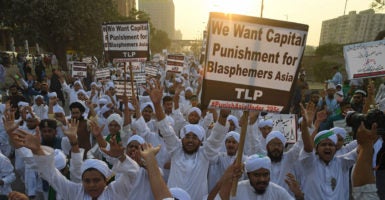 The Pakistan Supreme Court thankfully rejected a petition Tuesday seeking to revisit the acquittal of Asia Bibi, a Pakistani Christian woman who had been convicted of blasphemy and spent eight years on death row before being exonerated by that country’s high court in October of last year.

However, radical Muslims fueled public riots demanding her execution and filed an appeal of the court’s exoneration. With this latest (and hopefully last) development in the case, Bibi (who has been through so much) will hopefully be able to finally leave the country and live safely elsewhere.

This long and unfortunate case all began when Bibi had a dispute with Muslim co-workers over drinking from the same cup of water, which led to an allegation and conviction for blasphemy against Islam—an offense which is highly politicized and used against religious minorities in Pakistani society.

In recent years, other unfortunate individuals have been wrongly accused and put on death row for blasphemy, with many others being extrajudicially executed. Even their defenders—some high-profile individuals and leaders—are not safe.

Pakistani leaders like Minorities Minister Shahbaz Bhatti and Punjab Gov. Salman Taseer who have taken a public stand for Bibi have been assassinated (Taseer by his own bodyguard). Due to threats, even Bibi’s lawyer had to flee to the Netherlands for asylum, which he relinquished by returning to assist her during this latest episode of the case.

Public pressure from Islamists calling for her execution has been a constant. In recent months it has reached a fever pitch. The radical Tehreek-e-Labbaik Pakistan (TLP) party, which has fixated on Bibi’s conviction and execution—and is now fixated on assassinating her despite her acquittal—led mass protests which virtually paralyzed the country after her acquittal in October.

A number of party leaders were arrested after the melee, during which one of the TLP co-founders openly called for revolt against the military, for the murder of the Supreme Court judges who acquitted Bibi, and branded Prime Minister Imran Khan (not exactly a foe of Islamists) a “son of Jews.”

The TLP is the same party which gave Taseer’s bodyguard assassin a hero’s welcome home, even after he had been convicted by the Pakistani government for the murder. After the assassin’s execution by the government, his funeral was attended by an estimated 100,000.

The fact that the hardliners continue to call for her death despite the fact that there was no blasphemy here is illuminating, and oft overlooked in discussions of the case.

In its October ruling, the Supreme Court did not overturn or throw out the blasphemy law itself (despite the real problems with these laws for human rights and religious freedom), but only said there was no evidence that Bibi committed blasphemy. So why the continued indignation from Islamists?

It would seem that the blasphemy ideology is so deeply rooted in Pakistani society, in particular hardline elements in sync with the TLP and others like them, that there is a simple refusal to accept any other result but an execution upon even a whiff of an allegation of blasphemy.

While it is difficult to know for sure, the sad reality is that they appeared to be using Bibi as a scapegoat for their “purification” of Pakistani society.

Let us pray for a transformation in Pakistani society, and let us thank God for Asia Bibi’s defenders. May they continue to give religious freedom a glimmer of hope in Pakistan.